LYNNFIELD — So much for the preliminaries.

Prior to the final home game of the regular season, 20 Pioneer seniors and their parents were honored. After the photographers and flowers were whisked away, the Pioneers proceeded to pound a depleted Generals team for their sixth win of the season, completing a perfect 5-0 CAL Baker Division record. It was Lynnfield’s 20 straight league win, a streak that stretches back to the beginning of the 2012 season. 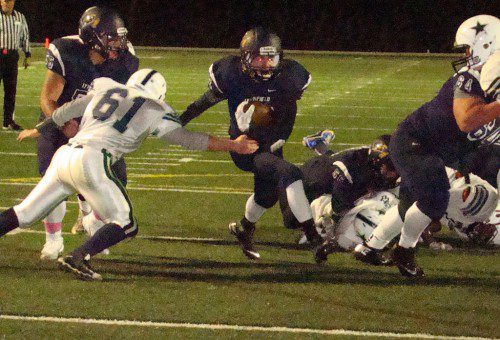 FIRST TIMER. Sophomore Cameron Lilley (32) rumbles through a hole opened by his teammates, including, Zack Huynh (left), for his first varsity TD. The score came in the fourth quarter vs. H-W. (Tom Condardo Photo)

With the victory, the Pioneers nailed down the third seed in the Division 4 North and will host sixth seed Watertown Friday night to kick off the playoffs.

The Pioneers expected a tougher battle from Hamilton-Wenham (2-3 Baker, 2-5 overall) but the Generals came in without the services of several key players including starting quarterback C.J. Cooper and top lineman captain James Craig.

H-W sophomore QB Hunter Wilichoski put up solid numbers, completing 14 of 30 passes for 186 yards and a TD in a tough assignment. Another sophomore, Cam Peach, was outstanding, hauling down seven passes for 135 yards and the lone General touchdown.

Pioneer head coach Neal Weidman, who was hoping for a better test heading into the playoffs, said the fact that the Generals did not have “a full team was not necessarily beneficial for us. But we were able to jump out quickly and got a lot of people involved early.”

The Pioneers’ defense stifled the Generals’ ground game, holding them to minus 11 yards rushing for the first three and a half quarters. Wilichoski hit Peach with a 45-yard strike for the lone Generals’ score midway in the fourth quarter.

Meanwhile, the high-octane Pioneers’ offense was on full display from the start. They scored on five of their six first-half possessions and seven of their first nine overall. Captain Drew McCarthy again led the way, scooting for 116 yards and a pair of TDs on only eight carries. He averaged 14.5 yards per touch.

Max Robert put the Pioneers in position early, picking off Wilichoski on the first play of the game. A 29-yard run by McCarthy followed by a 19-yard scamper into the end zone put the Pioneers on the board quickly. 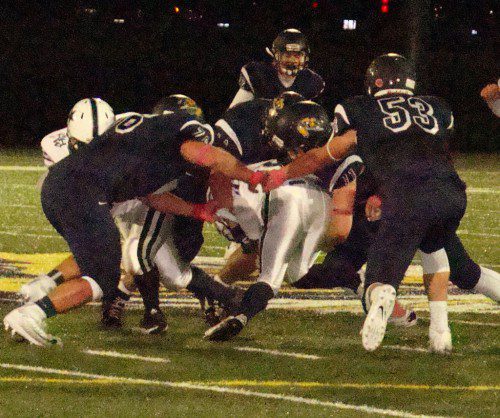 Alex Soden blasted in from the 1 in the third and Cameron Lilley scored from six yards out on the second play of the fourth quarter to round out the Lynnfield scoring. The Pioneers piled up 469 yards of offense, 357 on the ground.

The game was a fitting ending for the graduating seniors who were recognized before the game. This group has been part of four championship seasons, a Super Bowl trip and a division title. Their record over the past four years is 35-7.

The Pioneers still have some meaningful games to play and the first one begins with Watertown on Friday (see separate story).