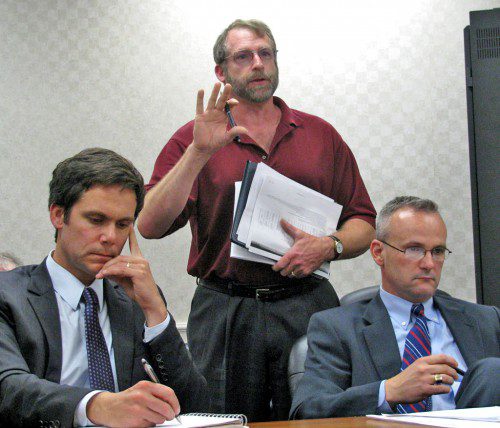 SHELTER’S DIRECTOR OF DEVELOPMENT Michael Glynn (left) and Attorney Brian McGrail listen as Matthew Jewett (standing) of Byron Street and a member of the Unitarian-Universalist Church addresses the impact that the abutting Brightview facility would have on the church. (Mark Sardella Photo)

WAKEFIELD — No decisions were made but Shelter Development presented more architectural detail on its proposed 137-unit Brightview Senior Living facility on Crescent Street at last night’s meeting of the Zoning Board of Appeals. The board in turn gave Brightview representatives feedback and indicated areas related to density and architecture that need to be addressed further at a special ZBA meeting set for Wednesday, Nov. 5. That meeting will also move on to discuss landscaping, lighting and signage.

Attorney Brian McGrail began by asking Shelter’s Director of Development Michael Glynn to address public questions regarding how Shelter got from a possibility of 90 units to the currently proposed 137.

Glynn said that when Shelter entered into an agreement two years ago to purchase the Fraen Corporation properties (338 Main St. and several houses on Crescent Street) they were exploring several options, one of which was for 90 assisted living units. After doing a feasibility study, Glynn said, the company saw that there was a significant need for independent living units as well as assisted living and memory care units. They viewed the downtown location with its walkability as ideal for independent living.

After the combined senior living/garage proposal did not go through, Glynn said, Brightview added a different piece of land (25 Crescent St.) in order to reach the square footage of land required under the bylaw to construct a 137-unit facility. He said that Shelter/Brightview was encouraged when Town Meeting twice said that it wanted to accommodate seniors in the downtown area – first when it created the overlay district and later when it added independent living to the overlay district.

McGrail stressed that the proposal before the board was the 137-unit combined assisted living/independent living facility, which he said met the density allowed by the bylaw given the land area.

Anderson said that the design tried to reduce the feel of a massive building by providing breaks in the facade and rooflines. Anderson was receptive to the idea of faux doorways to further break up the façade.

ZBA member James McBain suggested lowering the ends of the building slightly so that the height would seem less abrupt in relation to nearby homes. McBain acknowledged that this could impact the unit count. Anderson said that he would try to incorporate McBain’s suggestion.

Anderson also presented a “shadow study” in response to concerns raised at the last hearing related to the proposed building blocking sunlight from hitting the Unitarian Universalist Church. The study did show some reduction of sun hitting the church and its stained glass windows, mainly during the winter.

ZBA member Chip Tarbell asked about the components of the proposed building façade. Anderson said that typically Brightview uses a combination of vinyl siding, brick and stone, but he indicated that he was open to input from the board. Tarbell also suggested that the Main Street facade should also be broken up.

When the hearing was opened to public testimony, Spaulding Street resident Robert Mitchell questioned the legality of the proposed 60-foot height of the building, arguing that a maximum height of 50 feet was allowed in the Assisted Living Overlay District. But McGrail pointed to where the bylaw says that business district dimensions are incorporated into the Overlay district allowing heights up to 60 feet.

Joyce Lamb of Whittier Road asked what the impact would be if the top floor were eliminated. McGrail said that that doing so would make the project unfeasible for Shelter. Lamb also asked about the cost of individual units but was told by the board that it was relevant to the discussion.

In response to a question from Bronwyn Della-Volpe of Cyrus Street, McGrail said that in order to incorporate independent living units, the facility needed to be closer to 140 units than 90 units.

But Della-Volpe insisted that the public was told that the alternative to the earlier proposed 140-unit assisted living/garage plan was a 90-unit facility.

McGrail said that Shelter had never filed any plan before any local board for a 90-unit facility. “The bylaw speaks for itself,” McGrail said. “We meet the bylaw.”

Eaton Street’s Davis Knudsen wondered if the building could be expanded out further into the front portico and circular driveway area of the current plan in order to make up for units lost if the building were lowered in other areas as suggested by McBain.

Jeff Klapes of Eaton Street suggested modeling the building after a grand New England hotel with long verandas to accentuate the horizontal and give the impression of lower height.

Patrick Bruno of McKenzie Lane returned again to the 90-unit question, asking if there was ever a presentation for a 90-unit facility.

McGrail did say that prior to his representing Brightview, there had been a pre-application meeting with the ZBA in early 2013 where 90-units may have been discussed. But he stressed that 90-units would have been assisted living only. He said that the business model had since changed to a more workable combined assisted living/independent living model.

Yale Avenue’s Amy Burd asked if the recently acquired 25 Crescent St. lot that is part of the site but not part of the Overlay District could be added to the district in order to allow part of the building to be constructed on that lot and thereby reduce the overall height.

McGrail said that the long process of adding that lot to the Overlay District via Town Meeting would be too complex and time consuming to be workable.

Matthew Jewett of Byron Street and a member of the Unitarian-Universalist Church addressed the earlier discussed shadow study. He maintained that the shadows from the Brightview facility would block most of the church windows, significantly altering the church’s ambience throughout the year.

ZBA member Michael Pierce wondered if there was a way to alter the roof line in that area to allow more sunlight through to the church.

The hearing was continued to a special meeting of the ZBA on Wednesday, Nov. 5 at 7 p.m. Shelter is expected to address some of the architectural concerns and suggestions raised at last night’s hearing. But the board wants the Nov. 7 meeting to also focus on landscaping, lighting and signage.