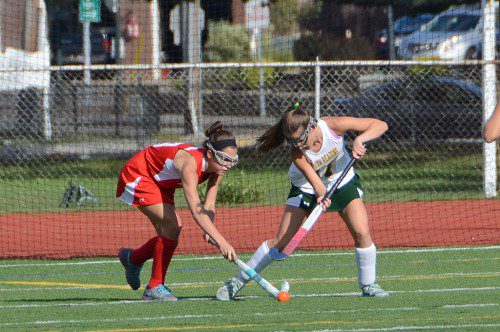 NORTH READING — The North Reading High field hockey team tied visiting Manchester-Essex, 1–1, last Friday afternoon. The Hornets pulled a rabbit out of the hat in this game as Chloe Gladu tied the game with only 2.4 seconds left in the game as the Hornets escaped defeat.

“It felt like a win,” admitted Hornets head coach Mia Muzio. “We controlled the territorial play.”

North Reading went to 1–3–2 overall with the tie.

Manchester-Essex scored their goal with 4:30 remaining in the opening half.

The locals outshot Manchester-Essex, 7–4, on net.

On Sept. 17, the Hornets edged visiting Pentucket, 1–0, to improve to 1–3 in the Cape Ann League Large division.

“It was so nice to beat them,” said Muzio. “The girls were pumped and this win represents a shift in our season. It is the best game I have seen our team play in the four years I have been in the program.”

Senior co-captain Nicole Lee accounted for the lone goal of the day off a corner as Liz Carlson assisted late in the first half.

Perrone made two saves to post her first shutout of the season.

The Hornets next game will be on Friday as they host Rockport at 3:45. It will be an emotional game for Muzio, who played at Rockport High as her coach there, Mary Ryan, is still the Vikings head coach.

North Reading then host Malden in a non-league game on Saturday at noon and then welcome Amesbury next Monday afternoon at 3:45 as they return to CAL play.

On Sept. 30, the Hornets host Bedford in another non-league contest. That game will also start at 3:30 p.m.