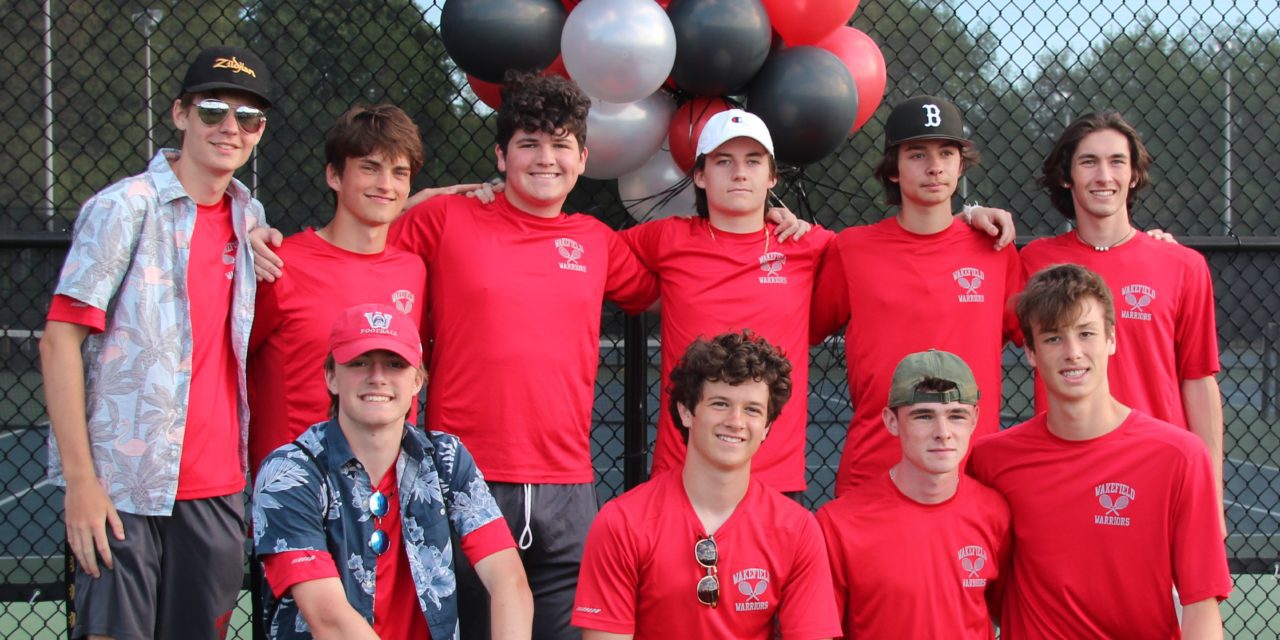 WAKEFIELD — The Wakefield High boys’ tennis team had much to celebrate on Tuesday as they honored their teammates from the class of 2022 on Senior Day. On a sunny and blustery day, the Warriors faced one of their toughest competitors, the Burlington Red Devils. Despite the strong winds, Wakefield powered through and won the match 3-2.

At first singles, senior captain Ben Palmer had a very close match against Aditya Pathak. Palmer lost the first set 6-3 but battled hard in the second set, tying it up at five all. Due to the wind, Palmer had several long deuce games and some unfortunate bounces. Pathak took the second set 7-5.

“Playing first singles in the Freedom Division is so challenging. You are playing the best player on the team,” said head coach Cheryl Connors. “Ben has faced some highly skilled opponents and has played some beautiful tennis. I’ve seen a huge growth in his game this year.”

Freshman Luke Greif faced off against Andrew Perl at second singles. Greif had a strong start getting up 5-1 in the first set. Perl battled back, winning the next two games. But Greif found his groove and took the first set 6-3. Riding the momentum, he closed out the match, winning the second set 6-1.

Senior captain Matt Conley, who is 9-3 for the season, cruised to a 6-0, 6-1 victory against Ronak Gade.

“Matt is such a consistent player. He rarely makes unforced errors,” said Coach Connors. “Matt’s slice is very tricky, often leaving his opponents off balance. And he gets to absolutely everything. He is a smart tennis player and a joy to have on the team.”

At first doubles, senior captain Michael Leary and his partner Kyle Russell had a dominating first set winning 6-0. But the second set was a different story. Leary and Russell were down 3-5 but got back on track, winning the next three games. Burlington tied it up to six all, forcing a tie-breaker for the set. Wakefield’s dynamic duo pulled it out, winning their match and clinching the team’s win with their victory.

“Mike and Kyle always put on a good show. They love the game and keep things exciting,” said Connors. “Their styles balance each other out. Mike loves the net, and Kyle loves to lob. In this match, both players had some great plays at the net.”

At second doubles, senior Alex Fata and freshman Kevin DeGray faced highly skilled opponents Malachi Riley and Arnesh Yeola. Fata and DeGray kept the first set close but eventually lost 6-4. With the wind blowing many balls out, it was difficult to serve. Despite making some great shots and key defensive plays, the pair lost the second set 6-2. 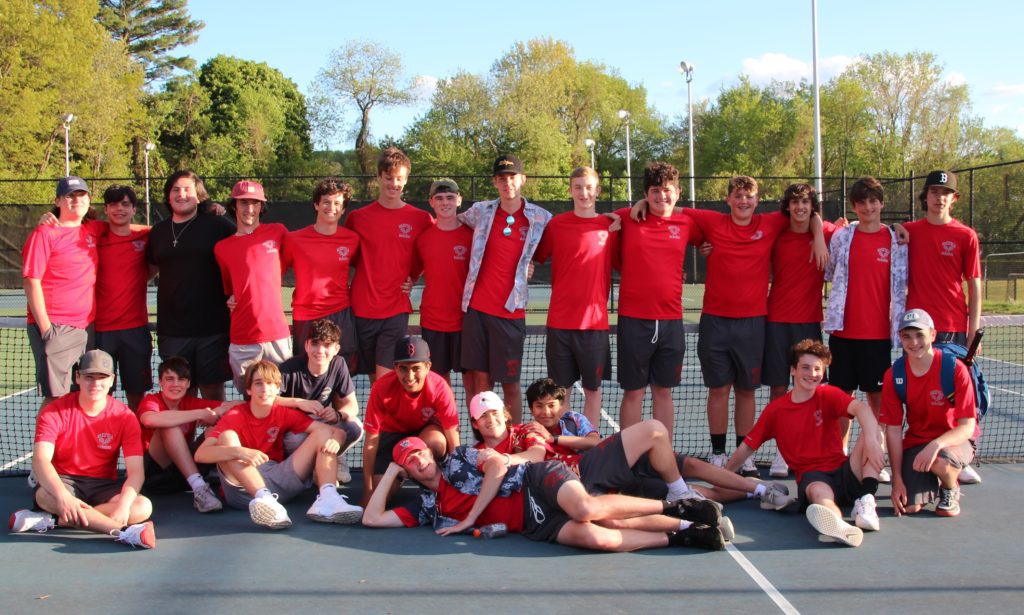 “Alex and Kevin partnered up mid-season, so they are still learning each other’s style of play,” said Connors. “They continue to improve with each match. They have great sportsmanship and determination.”

Riding high from their win, the team celebrated their 11 seniors with pizza and dessert.

“This is a great group of young men. They fight hard, support each other and have fun,” said Connors. “I couldn’t ask for anything else.”

Connors was especially grateful for her senior captains who have embraced their roles as leaders on the team this season.

Of Palmer, a 2nd year player, Connors said, “He is a great player and an amazing athlete; very committed to tennis and improving his game.” Palmer will be playing tennis at Roger Williams.

Of Leary, a 4th year player, Connors said, “He is a great doubles player and a great captain because he is very motivated.”

Of Conley, a 4th year player, Connors said, “He is so good at singles because he can problem solve on the court and has a strong work ethic.”

“All three captains are great leaders, show wonderful sportsmanship and encourage younger players on the team,” said Connors. “They have been a pleasure to coach.”

On Friday, May 13, the MIAA released their latest power rankings. The Warriors are currently ranked 11th out of 51 teams.

“In my time as a coach these past 14 years, this is the strongest showing for a Wakefield boys’ team,” said Connors. “We not only made it to states, but we also ranked just out of the top 10 and are undefeated in the Freedom Division. I am incredibly proud of these boys.”

The boys have two matches remaining against Watertown, the first was away yesterday after press time.

The schedule for the state tournament has not been confirmed, but the boys will likely play a home match between June 5-7.