At Chamber of Commerce breakfast 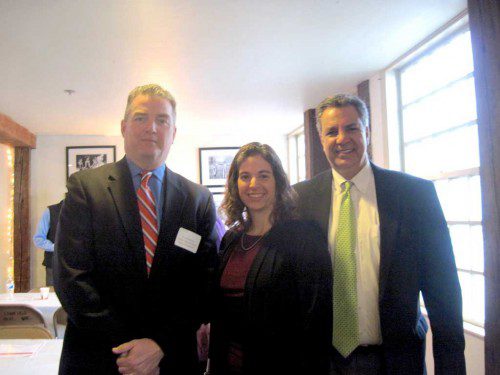 TOWN ADMINISTRATORS James Boudreau (Lynnfield, at left) and Stephen P. Maio (Wakefield, at right) spoke about the business climate in their respective towns at a Wakefield-Lynnfield Chamber of Commerce breakfast meeting held at The Meeting House in Lynnfield. Boudreau and Maio are shown with Chamber Executive Director Marianne Cohen. (Gail Lowe Photo)

LYNNFIELD — At an early morning breakfast held yesterday at The Meeting House on Main Street in Lynnfield, the Town Administrators for Wakefield and Lynnfield spoke enthusiastically to some 50 Wakefield-Lynnfield Chamber of Commerce members about the business climate of their respective towns.

Both Stephen P. Maio (Wakefield) and James Boudreau (Lynnfield) are confident about the future of their towns but said there is more development to come and agreed that more work and construction needs to be done.

In his opening remarks, Maio pointed out the similarities
between the two towns (angled parking, for instance) and provided a few statistics; namely, that 86,000 people live within Wakefield’s three mile radius and that the average income per household is $88,000.

Maio’s eye is trained specifically on how both towns can capture more business.

He emphasized what he has said in the past about the need for a center strip extension on upper Main Street that will allow pedestrians enhanced safety while crossing the street.

He also talked about turning the former Wakefield Municipal Gas and Light Building on Albion into a cultural arts center that would draw more people to downtown.

He pointed to Lexington and Jamaica Plain as two communities where this living standard has succeeded.

Maio showed a photograph of downtown Killarney, Ireland where he visited recently with his family. A photograph of the downtown showed bicycles mounted on the tops of buildings as a method to promote a bike race that had been held in the town.

“Pub music is projected onto the streets in Killarney,” he said. “The cultural component (in the town) brings people in.”

None of this comes without a lot of hard work and imagination, however, he said in closing.

“There would need to be zoning changes to increase density and it would mean construction,” Maio said. Boudreau, on the job for one year, said he and his Board of Selectmen are aware of how their business decisions affect small business owners.

“We make decisions that help you thrive in business,” he commented, pointing out the meals tax generated from Market Street restaurants.

On the topic of Market Street, he mentioned the addition of an Apple facility that will feature a large glass window like the one in California. Gaslight, a new restaurant that offers French cuisine, also recently opened.

Plans for Lynnfield include a new developer coming to town, new traffic flows and changes in zoning bylaws. Also, behind MarketStreet a new nine-hole golf course is in the works and will possibly open in the spring.

He ended his talk, saying that “the more people we can get to come to the area, the better for everyone.”

Questions from members included concerns about further development along the Salem Street corridor for both towns, the addition of a theater at MarketStreet and how to engage business owners who do not own the properties where they operate.

The biggest issue in the Salem Street area is traffic,” said Boudreau. “We need to talk with the state about this.”

“A small boutique theater was discussed but more space is needed and zoning laws will have to change,” Boudreau said.

“The MAPC (Metropolitan Area Planning Council) is coming in to help business owners who do not own the property where they do business,” said Maio. “The Chamber leadership can also help.”

In closing, Wakefield-Lynnfield Chamber of Commerce Executive Director Marianne Cohen announced that Restaurant Week would be celebrated between Monday, Feb. 9 and Sunday, March 6.

Wednesday’s meeting was sponsored by The Savings Bank and First Financial Trust.

She also mentioned a new program titled Wakefield 101. A separate story about this appears on page 3 in today’s Daily Item.