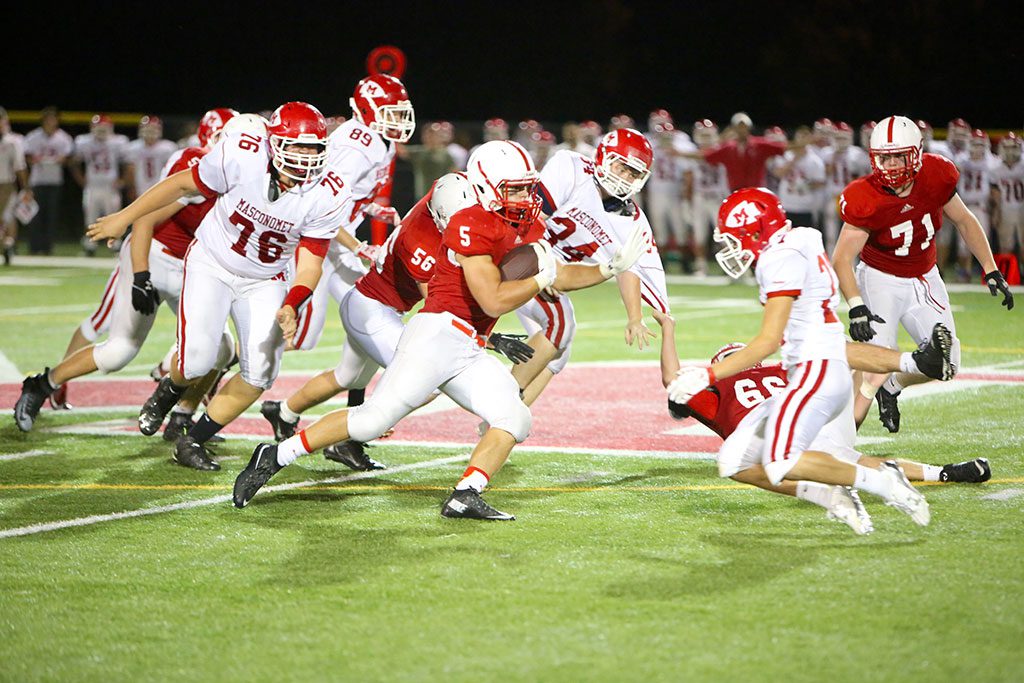 MIKE PEDRINI was unstoppable last Friday night for the Melrose Red Raider football team, who won their season opener against Masconomet 41-14 at home. The junior running back scored 3 TDs and ran for over 100 yards to help Melrose start their season 1-0. (Donna Larsson photo)

It was the debut for senior quarterback Julian Nyland (9-11, 145 yards) who passed with flying colors, throwing two touchdowns, including a 27-yard toss to playmaker Ryan Censullo and a 36-yard bomb to Pedrini in the first half that gave Melrose a lead they never let go of.

“Julian threw me a dime,” said Mike Pedrini after the game. “He’s been throwing me dimes all summer. I love him as a quarterback. He’s just a great leader.”

There was a lot at stake for Melrose after returning from last year’s Div. 3 Super Bowl, but according to Pedrini, it was simply back to work for the team. “It’s definitely good to get back out on the field,” says the junior, who scored three times in the first half on Friday. “We came out flying. We were wicked excited to get out here and just play.”

In the opening minutes of the game it was a back and forth offensive attack between Pedrini and Masco’s Scott Foden as the two teams swapped touchdowns. Masco scored on their first possession after Foden rushed 65-yards on a series of 13 carries for a touchdown that put Masco up, 7-0. Melrose responded immediately as senior Jay Tyler returned kickoff for 47 yards and a series of carries by Pedrini resulted in his  touchdown that tied it, 7-7.

According to head coach Tim Morris, Melrose’s high energy performance made the difference against Masco. “They [Masco] ran it right down our throat a couple of times, but we played at a high pace,” he said. “They were big, but I think they got a little tired too. That definitely helped.”

Melrose took a 13-7 lead at the start of the second when Pedrini and Tyler moved the ball up field and Pedrini found the end zone on a 8 yard scamper. A wide open Pedrini would score again off a 38 yard bomb from Nyland in the second while Melrose’s Tyler rushed for a touchdown on their next possession giving the Raiders a healthy 27-14 lead close to the half.

Masco offense relied solely on Foden over the night, but Melrose defense clamped down on him with key tackles by Will Brincheiro, Brian Mercer, Jaret Botelho, Tom Calvert and Cam Hickey. Shortly before the half Melrose defense launched a dramatic goal line stand that drained the clock and took the energy out of Masco, on the verge of scoring at the 2 yard line. From there, Melrose defense stopped Foden in the third and fourth quarters, limiting him to just a few carries while Masco quarterback Declyn Judge (8-15, 75 yards) tried unsuccessfully to find the end zone.

In the second half, Melrose saw touchdowns from Nyland, who scored on an 11-yard keeper in the third, and Ryan Censullo who caught a 27-yard touchdown pass. After Melrose’s Brincheiro picked off Judge in the fourth, Chieftain offense diffused and the results was a 41-14 Melrose win that avenged a seasoning- opening loss against the Chieftains in 2014.

While the win sent fans into a frenzy, a pragmatic coach Morris was cautiously pleased with the result. “I’m happy, but not satisfied,” said Morris. “We’ve got to do a lot better job tackling and just working on the basic fundamentals on defense. There’s a lot work on, but it’s a good start.”

A breakout player emerged in Melrose senior Jay Tyler, who proved nearly impossible to tackle by the Chieftains. Tyler, a standout dash runner on the spring track team, used his speed to penetrate defense and was seen in the second quarter dragging an army of lineman down field before scoring his first half touchdown.

While the Red Raiders didn’t return many starters from last year’s Superbowl team, it didn’t seem to matter thanks in part of the efforts of seniors Nyland, Calvert, Brincheiro, Censullo and Tyler, who did exactly what coach Tim Morris anticipated. Earlier in the season the coach told the Melrose Weekly that he expected his seniors to contribute because, “this is their time.”

Melrose (1-0) hits the road on Friday to Waltham for one of their few road games in the regular season. Waltham is 0-1 after a loss to Newton North last week and bring the field Aaron Jammal as QB and running backs Sean Turpin and Jordan Pantoja. Kickoff at Leary Field is at 7:00 p.m.