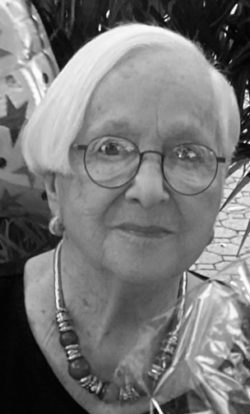 A great cook and baker

She was born in Revere, MA on March 2, 1931 and was the daughter of the late Nicholas and Emma Bucciero.

Ann had a wonderful life with her late husband Robert C. Trudeau for nearly 60 years of marriage.

She was a homemaker and an avid cook and baker; she made many delicious meals and was the happiest when her children and grandchildren were at the table.

She was the loving mother of Paul Trudeau and George Pessotti of Boca Raton, FL, Michele Silva and Mark Silva of CA, and the late Craig Trudeau. She was the cherished grandmother of Will Silva, Tess Trudeau, and Isabella Trudeau. She was the aunt of Patricia, Nicholas and the late Paul Perrotta of Melrose, MA, Michael Bucciero of CA, and several nieces and nephews. Ann was the sister of the late Michael Bucciero and his wife Phyliss and the sister of the late Marie Nichols and her husband Frank.

Her funeral service will be held in the McDonald Funeral Home, 19 Yale Ave., Wakefield, MA in 2022. Details will be announced at a later date.

In lieu of flowers, contributions may be made to St Jude Children’s Research Hospital 501 St. Jude Place, Memphis, TN 38105.