MELROSE — In the second round of the Middlesex League Tournament, the Melrose Red Raider boys’ lacrosse team lost their first game of the season to their Wakefield neighbors after 11 consecutive wins. Although Wakefield led the entire game, Melrose came back from a four-goal deficit to force the Warriors into overtime, where Wakefield defeated Melrose 9-8 in sudden death.

The Red Raiders faced off against the Warriors twice in the past two weeks before Saturday afternoon, and they shut down Wakefield’s offense in both games by scores of 17-8 and 9-3. However, Saturday was different. Wakefield’s offense was extremely potent in the first two quarters and Melrose coach Matt James commended their efforts.

“They came out and they were super aggressive and they won the ground balls and that was the big difference,” said James.

The Red Raiders were scoreless in the first quarter, as Wakefield jumped out to an early 3-0 lead. Despite many offensive efforts led by Brendan Fennell and Matt Dussault, Wakefield’s defense, led by goalie Kaiden Johnson, was a force to be reckoned with.

“They had a really great game plan,” said coach James about the Warriors led by head coach Tim Johnson. “They slowed us down offensively in the first half.”

Melrose broke their scoreless drought early in the second quarter when attacker Liam Maher sent a shot firing past Johnson, bringing the score to 4-1 in favor of the Warriors. The Red Raiders went on a quick scoring spree, notching two goals after Maher’s first. Matt Dussault scored the second with a bullet to the net and Stephen Fogarty followed him with a breakaway goal after a long pass by goalie Frank Capaldo.

While it was a heartbreaking loss, coach James praised the efforts of his goalie.

“I thought Frank was outstanding in goal. I think he kept us in it when we were lacking energy (and) when we kinda lost our heads there for a little bit in the third. I thought he was calm and collected. I thought he might’ve been the best player on the field. He was awesome.”

“I thought the kids responded well in the second half,” says James. “I thought that it was really a matter of that effort in the first half that they came out with. That kind of carried them.”

In the final 12 minutes of the game, Wakefield scored back-to-back goals and brought the score to 8-4, a lead that felt insurmountable. However, Melrose’s offense, led by Fennell, Matt Frawley, and Matt Dussault, did not give up. Fennell and Dussault both notched a goal, while Frawley earned two.

With less than two minutes left, Wakefield had possession and was looking to drain the clock. However, a dominant Red Raider defense led by Ryan Maher and Jake Rowe allowed Capaldo to regain possession and give Melrose one last chance at scoring. Matt Frawley tied the game at 8 apiece with only 59.7 seconds remaining, forcing the game into sudden death and commanding an eruption of cheers from the stands.

In their most promising offensive possession of overtime, Fennell maneuvered his way to the goal despite having two Wakefield players glued to him. He fired the ball at the net but just missed the goal.

Wakefield went down the other end and sent a difficult shot past Capaldo, ending the Red Raiders win streak and handing Melrose their first loss before they enter the MIAA playoffs.

Coach James applauded the Warriors offense for doing all the small tasks that are often overlooked. He emphasized the need for his team to focus and perfect these tasks as they enter state tournament play. Says James, “Sometimes I think when you are as talented as we are, you can lose focus on little things like ground balls or back cuts and little things like that might not be as flashy or as fun and that’s the one thing we are gonna have to get back to this week.”

The North Sectional tournament will likely begin this upcoming weekend for both the Warriors and Red Raiders.

Wakefield will face off against Reading at 6 p.m. on Monday night at Reading High for the Middlesex League Tournament championship while Melrose will begin to focus on the MIAA playoffs. 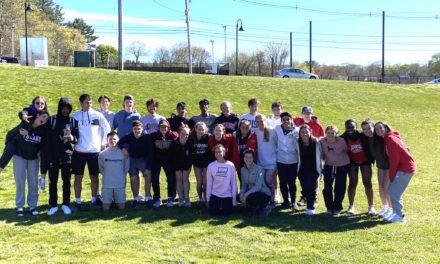 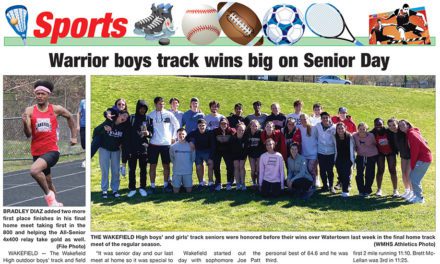 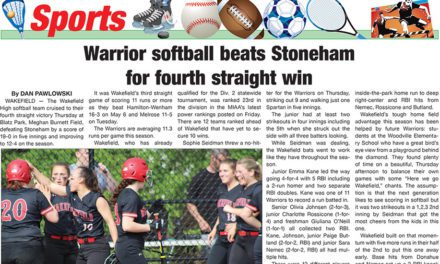