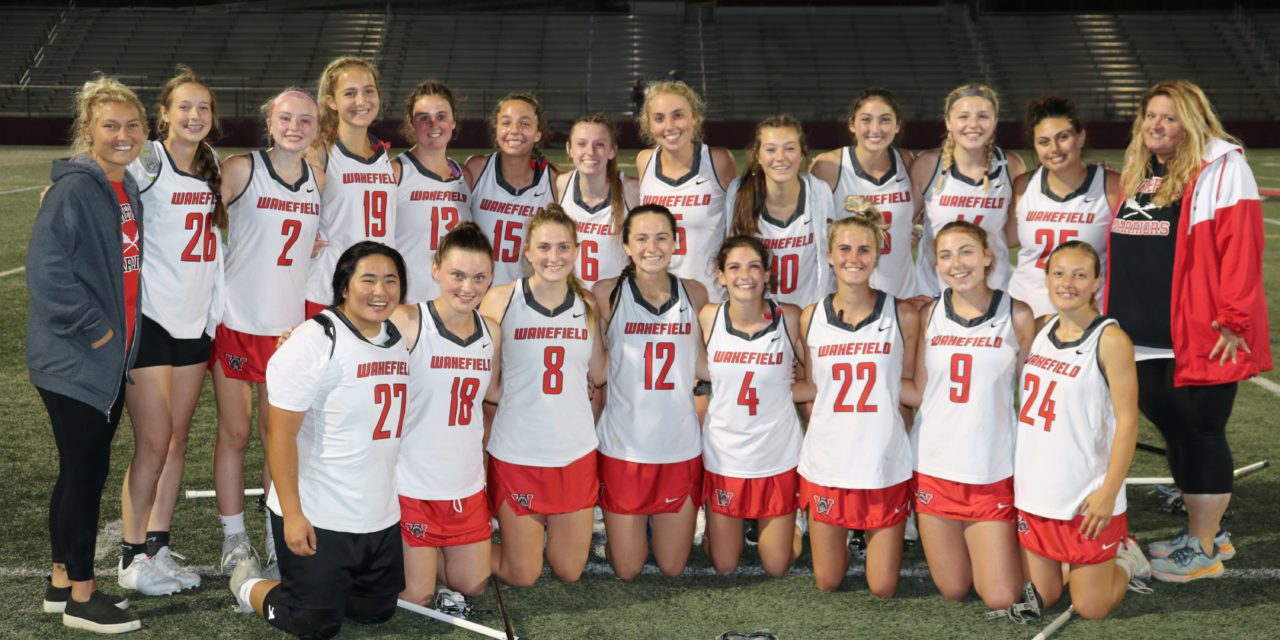 THE WARRIORS celebrate their first state tournament win in program history, 14-1 in the D2 preliminary round on Monday at Landrigan Field. (Dan Pawlowski Photo)

WAKEFIELD — The Wakefield High girls’ lacrosse team could sense it before their Div. 2 preliminary round game even started on Monday night at Landrigan Field.

“Let’s make history,” could be heard in the huddle.

They did it in convincing fashion, cruising to a 14-1 victory in front of a thrilled home base of fans.

“This is a great group of girls,” said head coach Cara Luca. “I’m happy for them; they’ve worked really hard all season and I know how tough it is especially for the seniors right now having already graduated so I’m just really proud right now.”

Wakefield played well enough in the first half to give themselves a 5-1 lead at the break but knew they could reach another level which they did in the second half by outscoring the Hurricanes 9-0.

The dynamic Warrior offense was led by junior Grace Seabury who scored a game-high 5 goals and added 2 assists.

Wakefield also got 2 goals and an assist from sophomore Molly Forrest and 2 goals from senior captain Christina Covelle.

Senior captain Kaylee O’Rourke and juniors Molly Berinato and Katherine Taylor all added a goal and an assist.

Junior Vivian Mottl and sophomore Kyleigh Formicola each chipped in a goal to account for the scoring as the Warriors put on a passing clinic late in order to keep possession and run down the clock.

“They played great,” said Luca of her attack. “The transition was good, the quick passing towards the net and they did well in finding the open lane.”

O’Rourke and Berinato did a great job on faceoffs and midfielders like Forrest and sophomore Juliana Spaulding battled to gain possessions and set up their offense.

All the while, Wakefield’s fans and especially the Red Sea student section brought the noise and pushed their team onto the biggest win in Warrior girls’ lax history.

“I’m really proud of the Red Sea, they boosted everyone’s morale,” said Nardone who gave her classmates plenty to cheer about as she was all over the field early, picking off passes and setting the tone. “I’m proud of the team as well.”

Covelle opened the scoring off a dish from O’Rourke. Forrest followed with a loose ball pickup in the offensive zone and score, followed by Seabury’s first which came after she intercepted a pass from the goalie. 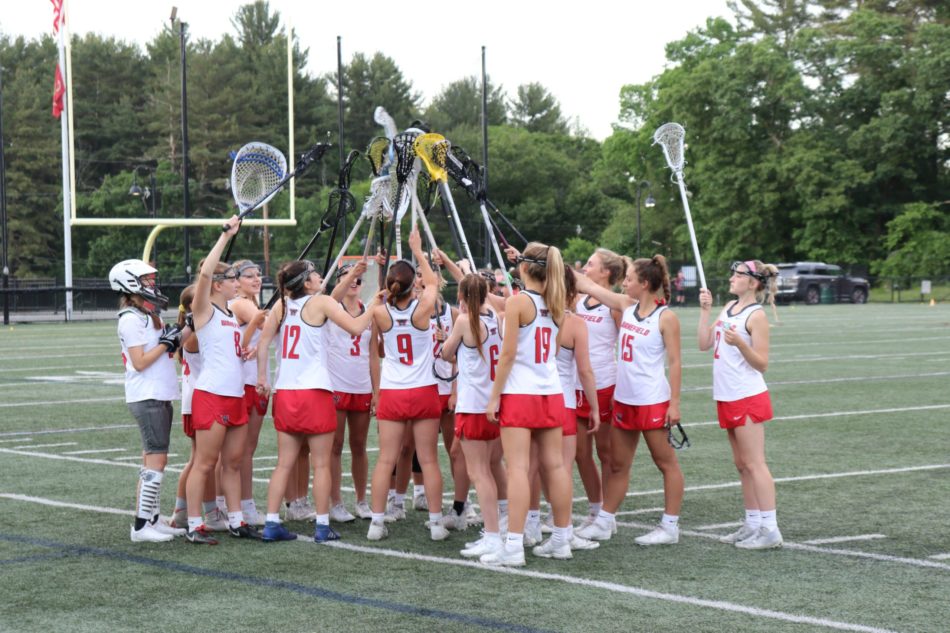 WAKEFIELD gets hyped up before their win over Amherst-Pelham on Monday at home. The No. 29 Warriors travel to Duxbury to meet the No. 4 Dragons tomorrow at 4:30 p.m. in a first round matchup. (Dan Pawlowski Photo)

O’Rourke set up Formicola’s goal by tapping the ball free along the sideline in the defensive zone, taking it down the field and finding Taylor who hit Formicola in front. Taylor later rang the post twice and despite the Red Sea’s call to “at least give her half a goal,” the score stayed the same until Taylor finally got hers off another sweet feed from Seabury.

Dimare meanwhile robbed two quality scoring chances, one an incredible stop on a low shot and another on a free position chance. The Hurricanes finally got on the board with 2.1 seconds left.

O’Rourke started the scoring in the second half, driving towards the net and alertly taking it herself when nobody picked her up. Berinato followed that up on a cross-field pass from Forrest to make it 7-1 and the rout was on.

Seabury fired home four goals in the second half to make things official, her most impressive coming on a dodge from behind the net in which she timed a jump around and in front of the crease while shooting in the air.

As Wakefield worked towards the finish line, it was impossible not to consider what the seniors had helped Luca and her staff accomplish.

There have been plenty of talented teams and accomplished players in Wakefield’s still relatively new history including current assistant coaches and Warrior lax alums Alyssa Marchant and Erin Riley. The team had made the tournament five times previous to this season, some playing in grueling Div. 1 sectional tournaments. 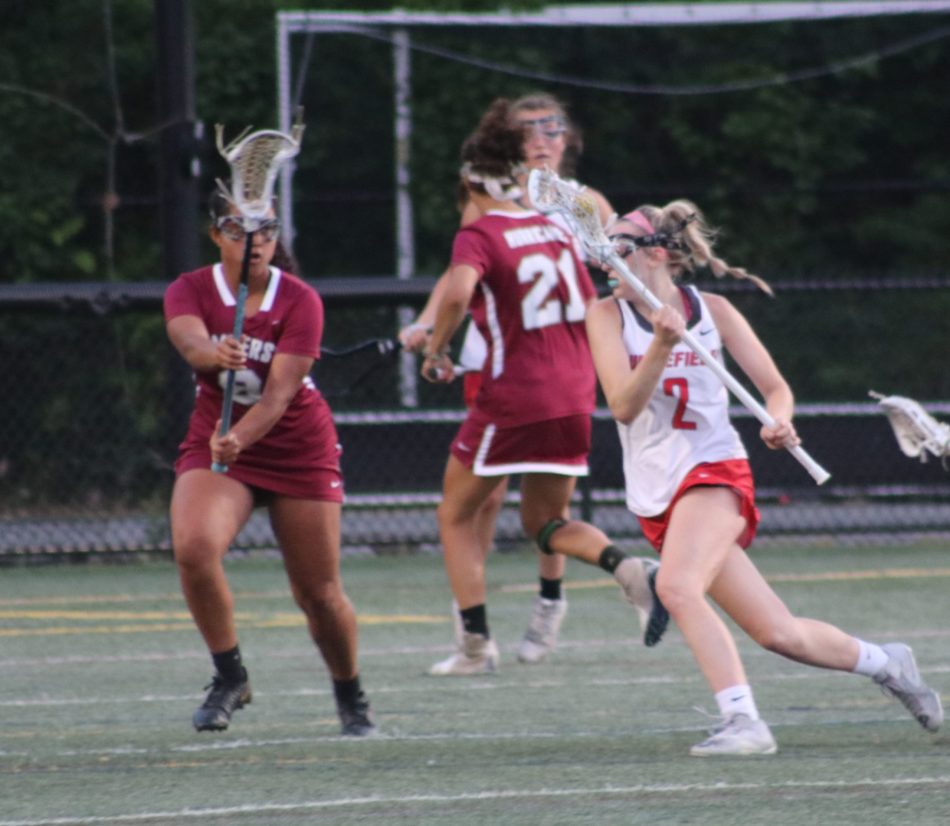 To win at states, Wakefield needed this group of seniors to step up, not just this year on their way to an 11-7 record, but especially last year as junior team leaders with no seniors on the roster. Wakefield understandably struggled in last year’s shortened season. That of course came one year after having no season at all.

“It was a complete turnaround from last season,” said Covelle. “I’m so proud of these girls.”

“Their leadership, it’s been amazing,” said Luca of her seniors. “The way they’ve worked together and taken the younger kids under their wing has been so impressive.”

Wakefield had some time to enjoy this one, but are looking forward to another chance to make some noise.

They travel to Duxbury to meet the 4th-ranked Dragons in the first round tomorrow at 4:30 p.m.

“We’re really happy with the win today and we’re looking forward to Thursday,” said O’Rourke. “We know its going to be a tougher team but we’re ready for it and we’re going to fight hard to come back with a second win.”

Luca knows in Duxbury will be waiting a program that has plenty of experience winning in the state tournament. The always talented Dragons went 12-6 this season. As the team prepares for the challenge, the message to her group will sound familiar.

“It will be the same thing I told them today: ‘Have fun,’” said Luca. “That’s all you can do. Have fun, just play and believe in yourself.”

As the captains did their best to sum up what it meant to lead the first state-tourney winning squad, the team’s spirit was perhaps best summed up by the soft-spoken Dimare.

“This is amazing,” said the goalie, taking one last look around a jubilant Landrigan with a smile in her and her classmates’ final home game. “I love this team.”