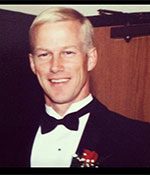 DANVERS — Warren Ford, 58, passed away peacefully Friday, June 10, at the Kaplan Family Hospice House in Danvers after a courageous battle with cancer.

Warren was born in Malden, son of the late Wendell and Evelyn Ford. Raised and educated in Wakefield, he graduated from Wakefield Memorial High School, Class of 1975.

Shortly after high school Warren enlisted in the United States Army. For three consecutive years, he served as a Special Operations Medic in the Second Ranger Battalion, 75th Ranger Regiment, where his fellow Rangers knew him as “Doc” Ford.

After his proud and dedicated service to his country, Warren met and married Jeanne (Bonomo) Ford. Warren secured a position with the United States Postal Service. He remained a dedicated postal employee for 36 years having retired just a short time ago.

Warren is survived by his spouse, Jeanne Ford of Woburn; son Nicholas Ford and his wife Jessica of Rowley; daughter Jennylee Ford of Woburn; granddaughter Parker Ford; siblings Mary Puccio, Wayne and Robert Ford, all of Wakefield, along with many nieces and nephews. In addition to his family, countless friends and colleagues will miss his presence in their lives and his ability to always make the best of any situation.

Relatives and friends are invited to attend calling hours on Wednesday, June 15, from 4-8 p.m.