Sweep quad-meet in Gloucester to go to 11-2 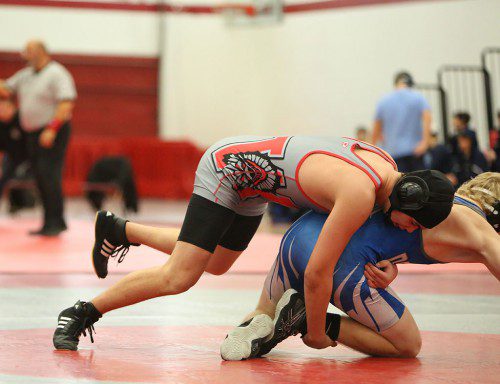 KEVIN TRAN, a junior (left), wrestled at 160 in a meet against Everett on Saturday at Gloucester High School. Tran won by pin and also won by forfeit at 160 against the host Fishermen. (Donna Larsson File Photo)

GLOUCESTER — The Wakefield Memorial High wrestling team keeps racking up the wins as it added three more victories in a quad meet on Saturday morning in Gloucester before the snowstorm hit.

Dale Denham, a sophomore, accepted a forfeit at 132.

Wakefield then won the next two weight classes by fall. At 138, senior captain Jack Spicer beat Jholley Defritas at 1:06. At 145, Ryan Smith, a junior, took down Liam Donahue at 1:37.

Kevin Tran, a junior, accepted a forfeit at 152 and there was no contest at 160.

Gloucester got another six points as senior captain Ben Piercy was pinned by Peter Deisomone at 2:37.

The Fishermen won their final contest at 220. Freshman Sam Valenti was pinned by Chris Cassetiri at 1:48.

The Warriors won two weight classes and accepted forfeits in three others as they prevailed by six points over the Tigers. There were many weight classes not even contested as well.

Spicer competed at the 145 weight class and dropped a 9-0 major decision to Matt Butler.

Unlike the football field where the Crimson Tide tend to dominate, Everett won just one of 10 weight classes against the Warriors. There several bouts not even contested as well.

The Warriors then won the next seven weight classes in a row.

Goochild pinned Keith Barrasso at 53 seconds of the 138 bout. At 145, Smith prevailed by major decision (12-3) over Jack Calascibetta.

Everett staved off the shutout with a win by pin at 220. Valenti lost by fall to Brian Velez at 1:22.

At 285, Dimeglio pulled out a 6-4 overtime decision against Tim Garlick.

Wakefield takes on Melrose in its first Middlesex League Freedom division dual meet tomorrow night at 7:30 p.m. at the Charbonneau Field House. The Red Raiders have also done well this season as they have lost one dual meet and tied another for their only blemishes of the winter.