WAKEFIELD — An armed robber made off with an undetermined amount of cash last night at S&M Liquors. 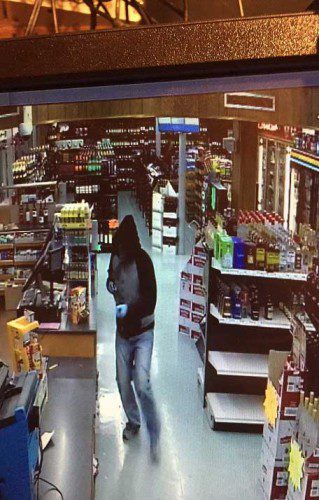 A SURVEILLANCE CAMERA captured this image of the suspect who robbed S & M Liquors on Water Street last night.

Police scoured the neighborhood surrounding the 260 Water St. establishment as they sought clues and the suspect just after 9 p.m. Their investigation continued this morning.

According to police, a white man standing about five foot nine with a slim to average build entered the store carrying some sort of long gun. His face was covered.

The suspect went right up to the cashier and demanded money. The suspect grabbed cash from the register and went out the front door. Police this morning said they did not know whether he got into a vehicle or in what direction he headed after leaving S&M.

One woman was shopping in the store at the time of the robbery. Police said she ran out of a door at the back of the store when she heard the robber’s demands. Another customer came in sometime after the robbery and before police arrived, which was just minutes after they received a 911 call reporting the incident.

State Police are assisting local police and Wakefield detectives in the investigation. Police were at the liquor store this morning before 8 a.m. The investigation will include looking at any video of the area that may be available from neighboring businesses. S&M serveillance did capture the suspect as he walked up to the counter.