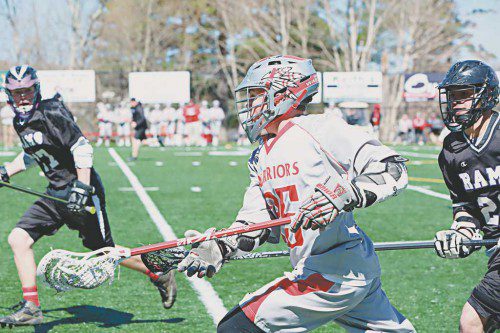 WAKEFIELD — The Wakefield Memorial High School varsity boys’ lacrosse team has six games remaining. The Warriors are entering the stretch run of their regular season and they’re kicking it into high gear.

Warrior head coach Andrew Lavalle spoke at length regarding the most recent win among other team related subjects.

“We really put it together in all aspects of our game,” said Coach Lavalle about the game against Belmont. “From the center X, to the defensive side, to the offensive side it was just a really complete game for us. I was really proud of the guys the way they played the whole time.”

The game was close at the start but soon the Warriors took control. Early in the first quarter it was tied at one goal apiece, Belmont’s offense had possession of the ball in Wakefield’s half for an extended run.

“The defense really started playing very well for us,” Lavalle said. “They made some big stops then they were clearing it. Our guys carrying over, Ned Buckley, a first year lacrosse player, he had some really good clears for us he was playing really hard.”

“One of our leaders on that defensive side, Dylan Brady, is an emotional leader for us. He sets the tone and he played a strong game for us,” Lavalle added. “In the second quarter he ate a shot point blank, a guy on Belmont ripped a shot and Brady got it right in the stomach.”

That provided the spark the Warriors were looking for according to Coach Lavalle.

The coach went into further detail of their defensive scheme for Belmont saying, “Number nine on Belmont is a really good dodger. We had Steve Marino on him and it created a really good match up for us. Every time number nine had the ball the only thing he wanted to do was get it out of his stick because Steve was so relentless. He was just being an absolute savage for us once again.”

The defense held Belmont to two goals but scoring 18 for Wakefield sealed the win.

“When you have that defensive mentality like they were, going out like mad dogs, it carries over to the offensive side,” said Lavalle.

The coach liked what he saw on offense as well.

“We got 18 goals but we were very patient on the offensive side. Vin Ferretti was very dangerous in transition, he made a lot of good plays for us and played with a high lacrosse IQ.”

However, Wakefield’s Brandon Grinnell is the spoon that stirs the pot on offense and he had another impressive game in the eye of his coach.

“Once again, Brandon Grinnell couldn’t be stopped,” Lavalle said. “He’s a guy that sees the field very well. As soon as he gets the ball he gets down on the offensive side. He analyzes and attacks. He is the centerpiece of our offense as far as points are concerned and being a strong lacrosse player. Mentally he is a total field general for us and I could never replace a guy like that.”

It didn’t stop with Grinnell though, as coach Lavalle went on to point out, “MJ Urbano netted a couple of goals, Austin Collard had a goal and a couple of assists and Bryan Noyes was another guy who was able to put some in for us.”

The coach then spoke about his second stringers, who had another impressive showing.

“Our second line guys are really much better than second line players. Andrew DeLeary planted a couple seeds right past the goalie, he was really ripping. We even had a couple freshman guys step up for us. On the offensive side Bobby Keegan ripped an absolute laser going top corner,” said Lavalle.

“On the defensive side we had Ryan Fitzpatrick. He was taking faceoffs for us and really dominating the faceoff X, as well as making good plays defensively,” said Lavalle.

Looking ahead from the win against Belmont, Wakefield looks to carry its momentum forward into its next game this afternoon at 4 p.m. against Wilmington.

“We have to approach these upcoming games with that winning attitude and keep trying to get better every day,” Lavalle said. “We, as coaches tell our players, ‘every day you get better or you get worse, you never stay the same when you’re playing’ and we truly have been getting better every day that we’ve been playing.”

“Nobody is going to lie down for Wakefield. Nobody wants to lose to us. Everybody wants to beat us,” continued Lavalle. “We’re really getting the best out of every team, which is nice. We can’t saunter into a game and expect to win, we know we’re going to be challenged every step of the way. I wouldn’t want to have it any other way and neither would any of the guys on the team.”