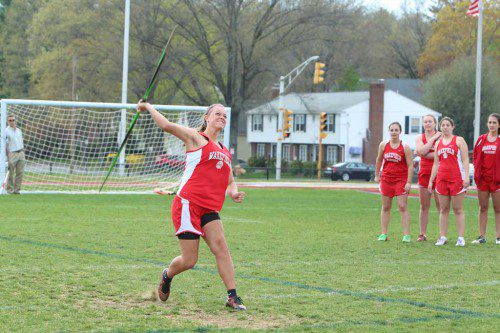 JULIA DERENDAL, a junior, captured first in the javelin with a state qualifying throw of 91-5 in Wakefield’s 74-62 win over Melrose on Tuesday at the Pine Banks Track. (Donna Larsson Photo)

MELROSE — The Warrior girls’ track team has a chance to win the Middlesex League Freedom Division championship when it runs against Burlington next Tuesday. But getting to that point wasn’t easy as Wakefield had to fend off a strong challenge from rival Melrose.

The Warriors did just this past Tuesday against Melrose as they posted 74-62 triumph over the Red Raiders at the Pine Banks Track.

Wakefield is now 4-0 in the M.L. Freedom division.

“We had a close meet (Tuesday) with Melrose. The girls came ready to win,” said Coach Karen Barrett. “We knew it would be extremely tight. We were also missing Sarah Buckley, who hurdles and jumps, due to an ankle sprain at the Twilight Meet. We had to shift kids around but we got the job done.”

Abby Harrington, a sophomore, started it off with a win in the 400 hurdles with senior Nicole Galli and sophomore Marissa Hoffman getting second and third for the sweep. They ran times of 72.0 seconds, 73.4 seconds and 78.7 seconds.

Seniors Shannon Quirk and Jillian Raso took second and third in the mile with times of 5:30 and 6:07.

Jill Cataldo, a junior, got Wakefield’s only point in the long jump with a 14-10 1/2 for third place.

Sam Nimblett, a freshman, took second in the shot put with a personal best throw of 26-7.

In the javelin, Julia Derendal, a junior, captured first with a state qualifying throw of 91-5. Alex Rollins, a sophomore, was third with a distance of 75-0.

Rollins also got a second in the discus with a heave of 70-0.

In the 100 hurdles, junior Avery Parece came up big with a win. She ran a time of 17.1 seconds which was a personal best and a state qualifying time.

Galli ran the 100 hurdles for the first time due to Buckley missing and was able to get Wakefield a third with a time of 18.9 seconds.

In the 100 meter dash, freshman Anna Lucas and Ross took second and third as they clocked in at 13.9 seconds and 14.0 seconds.

In the 400 meter run, Allee Purcell, a freshman, and Raso captured first and second as they running times of 64.1 seconds and 65.0 seconds. Raso also took a third in the high jump for the Warriors as they placed in three events.

Wakefield swept the two mile to clinch the victory. Freshman Gillian Russell ran a personal best of 12:52 to take first followed by junior Meg Hudson with a 13:11 and senior Hannah Melanson with time of 13:21. All three ran great races said Barrett.

The Warriors lost both relays which resulted in the last 10 points going to Melrose to make the final score a little closer.

“We will continue to work hard this week to get ready for our meet at home against Burlington on Tuesday,” said Barrett. “Both teams are undefeated so this meet will decide who is league champion.”

Wakefield hosts Burlington on Tuesday at 3:30 p.m. at the Beasley Track and Field facility. It is the second straight year that both the Warriors and Red Devils are vying for the league championship. Burlington captured the M.L. Freedom division title a year ago with a victory at Varsity Field.