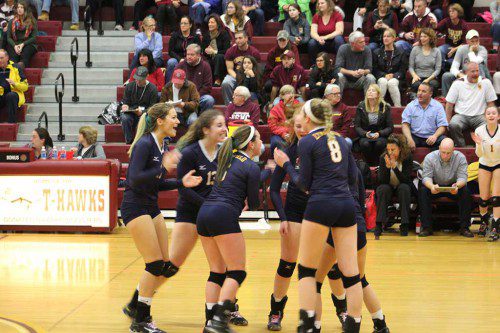 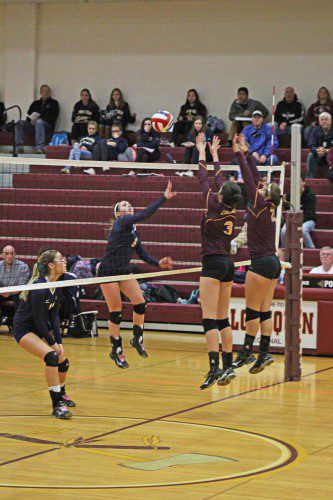 The Pioneers fell in three games to the South division champions, the Case Cardinals of Swansea, at Algonquin Regional High School in Northboro.

“I don’t think we played our best game today,” acknowledged Pioneer Coach Michelle Perrone after the game, who also credited Case for doing “a fantastic job.”

Perrone said the Cardinals were a “very strong team, especially on defense. We just didn’t have an answer on our side of the net for defense today. It happens. We just really weren’t moving our feet today. We were kind of stuck in one place and couldn’t really get out of our funk.”

The Cardinals capitalized on the opportunity by finding those open spaces to grind out the win by scores of 25-14, 25-17 and 25-16. Case did an “outstanding job,” Perrone said, adding, “They knew when to hit, they knew when to tip, and I wish them the best in the finals.”

In spite of the loss, the Pioneers played out some great points, posted many strong serves and rallied in the third game by taking the lead out of the gate while making the Cardinals work for every point. 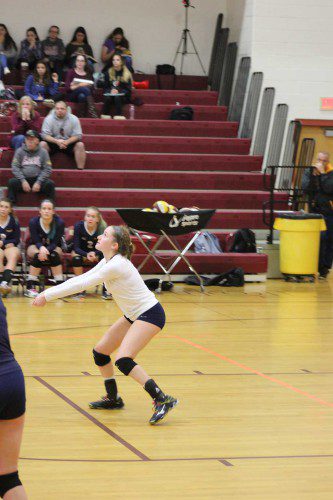 Perrone attributed the team’s rally in the third game to “the realization that if we didn’t come out and play strong that it was going to be over kind of quickly. So the girls really rallied, especially in our serving and really tried to go at them with our serving.”

Nugent, she said, “came up with some really key digs at some key moments.” A senior outside hitter, Nugent had five digs to go along with five kills in the game. “She usually shines for her offense but her defense was very good today,” she said.

Other notable statistics posted by the Pioneers against the Cardinals were eight digs by senior defensive specialist Camie Foley and seven digs and three kills by senior captain Olivia Pascucci, who is an outside hitter.

“It was a great season; a successful season. Any time you can come out of your division and make it into the state semifinals it’s a successful year,” Perrone said.

She added, “These girls have worked so hard. I can’t ask for a better group of girls to work with. They’re great on and off the court, so it’s been a pleasure, especially coaching my seniors.” 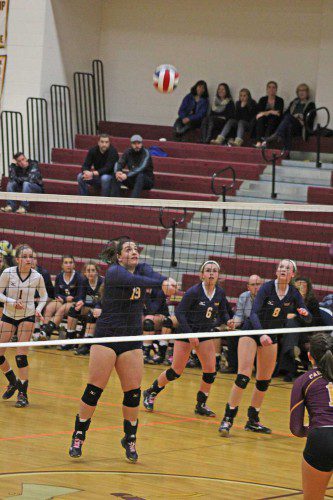 SETTER Emory Caswell (19) handles this ball perfectly to set up the play for her teammates in the third game of the state semifinals against Case High School. (Maureen Doherty Photo)

It was a season of many accomplishments. Lynnfield (11-1) beat out Hamilton-Wenham (10-2) for the Cape Ann League Championship title. The Pioneers split the regular season series with the Generals, with both games decided in competitive, five-sets matches.

The team then went on to win its seventh consecutive Div. 3 North sectional championship title by shutting out the previously undefeated No. 1 seed, Academy of Notre Dame of Tyngsboro (25-20, 25-17, 25-7).

Seeded third (16-4), Lynnfield earned a first round bye in the North sectional tournament out of 11 teams. The Pioneers shut out each of their opponents in the bracket.

The series began with a quarterfinals victory over Ipswich followed by a defeat of Lowell Catholic in the sectional semifinals. They completed the sweep over Notre Dame to emerge with the sectional title while improving their overall record to 19-4.

For Perrone, who has coached the Pioneers for nine years, she told the Villager that the biggest high point of the season was “just to see the progress and the growth from the beginning of the season to the end of the season. We’re pretty height-limited, so for us to be able to compete with some of the top teams in the state, that really is quite the accomplishment for us.