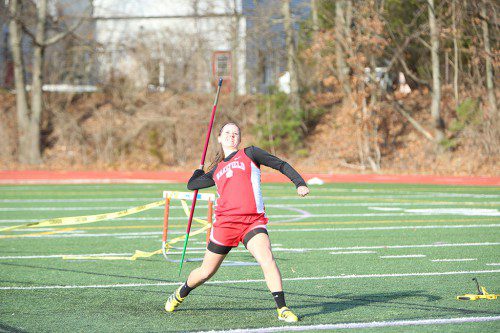 JULIA DERENDAL, a senior captain, won both the javelin and discus with throws of 96-8 and 82 feet in Wakefield’s 78-58 victory over Melrose yesterday at Pine Banks Track. (Donna Larsson Photo)

But after the two teams competed against each other at Pine Banks, it was the Warriors that left Melrose in the dust as they posted a decisive 78-58 triumph to go to 3-0 on the season.

“(The) Wakefield girls were in it to win it. They knew it was a huge meet and they all showed up,” said Coach Karen Barrett.

“She had a fantastic day and I am so happy for her,” said Barrett.

Marissa Hoffman, a junior, was third in the 400 hurdles with a time of 77.9 seconds.

Freshman Amanda Westlake ran the race of her career Barrett said. She won the mile as she clocked in at 5:46.

“She fought Cohan from Melrose the last 100 meters. She dug deep and edged her out at the finish line. She is a freshman and ran like a seasoned veteran,” said Barrett.

Gillian Russell, a sophomore, fought just as hard for third in the mile running a 5:59.

Allee Purcell, a sophomore, tied for second in the high jump with a personal best jump of 5-0. On the track, Purcell took first place in the 400 meters at 62.5 seconds and then went on to win the 200 meter dash with time of 28.5 seconds.

“She works so hard and continues to be an amazing track athlete. The sky is the limit for Purcell,” said Barrett.

Freshman Caroline Herzog earned her first varsity point with a third place in the long jump. She jumped a distance of 14-8 1/2 which also earned her a varsity letter

Senior captain Sarah Buckley won the 100 hurdles looking awesome in her first race of the season. She clocked in at 17.1 seconds. She also placed third in the triple jump with a 30-4.

“I am really glad to have her back,” said Barrett.

Eadeen Beck, a freshman, continues to take charge of the shot put winning with a 30 foot throw.

“Her hard work is really paying off,” said Barrett.

Alex Rollins, a junior, earned second place in the discus with a personal best throw of 78-0. She also placed third in the javelin with a distance of 85-2.

Senior Avery Parece was third in the 100 hurdles running a time of 17.4 seconds, her best time of the season.

In the 800 meter run, Cassie Lucci, a junior won the event for the first time as she clocked in at 2:34.5. Senior captain Sara Custodio was third with a 2:40.

Jordan Stackhouse, a junior, ran the two mile for the first time and got second with a 12:52. Freshman Isabella Kehoe was third with a personal best time of 13:38.

Wakefield lost both relays but the outcome of the meet had already been determined.

“I was so impressed with how the team stepped up and got the job done. This was a fantastic team win. We will now prepare for the relays Sunday,” said Barrett.

The Warriors will compete in the Div. 3 State Relays which will be held on Sunday at 9:30 a.m. at Burlington High School.