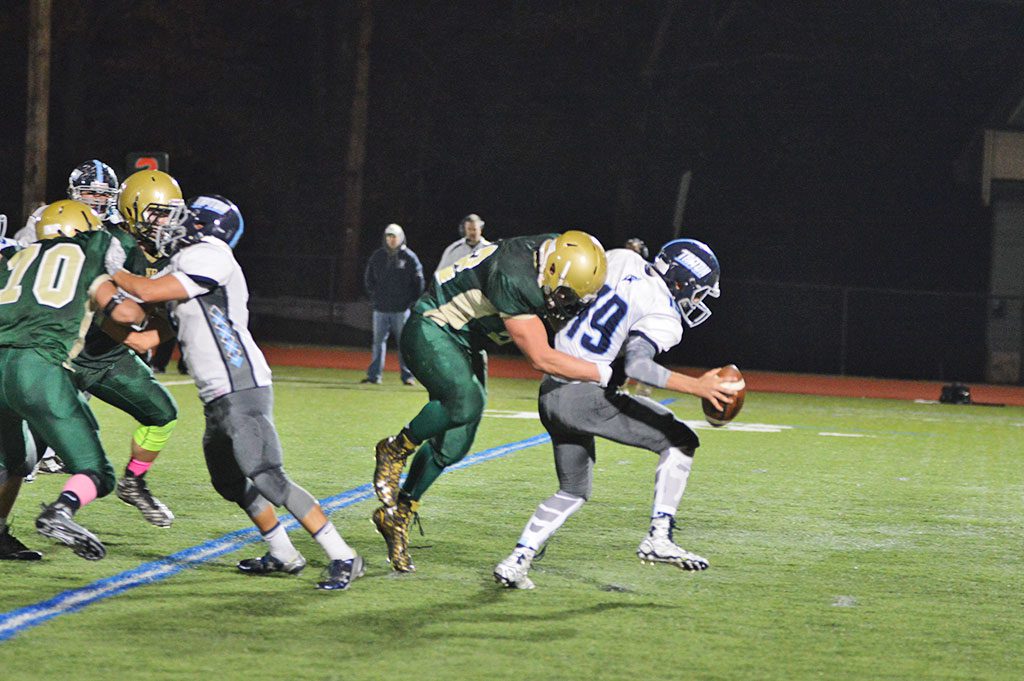 WELCOME TO NORTH READING. The Hornet defense was ferocious all night and was the key to North Reading’s 14–7 victory over Triton. Above, junior Bob O’Donnell has the Viking quarterback all wrapped up. (Bob Turosz Photo)

NORTH READING — The North Reading football Hornets are now 5–1 on the 2015 season as they defeated the Triton Regional Vikings 14–7, in a real barnburner Friday night, winning thanks to a touchdown in the last two minutes of the ballgame, in front of the proud North Reading fans. Another person who was proud of the team is their Head Coach Jeff Wall, who is experiencing one of the best seasons since taken over the reins of the football squad.

With the win, the Hornets qualified for the MIAA state football playoffs that begin next weekend.

“I told them that they’re a team that is mentally willing their wins right now,” said Wall. “They have so much heart and so much pride in what they do, that they’re forcing these wins out. They’re just phenomenal kids, they never give up and there were times in this game when they maybe could have given up but they didn’t. I’m real proud of them.”

Coach Wall was also proud of another moment that happened before the game, as his daughter, Katie Wall, who is a senior at the high school and is also on his staff doing statistics, sang the Nation Anthem and did it very well. Coach Wall didn’t even know that she was asked to sing. “I was on the sideline and actually talking to the other coaches, talking about our game plan and then they said ‘be quiet for a second and listen,’ then I said ‘What are you talking about, I’m trying to talk to you about the game plan,’ then they said ‘just trust us,’ then they walked away and heard her name being announced. I was like, ‘you got to be kidding me.’ It was real special and made the night real special.”

The game was a real defensive battle and Triton’s only score of the night was a Lewis L’Heureux 89-yard run with 6:36 left in the first quarter. The Hornet defense was stellar again, as they made plays all night including senior captain Nic O’Connell, junior Bobby O’Donnell and junior Michael Capozzoli, who registered quarterback sacks. Another highlight of the defense was junior defensive back John Merullo, who had a another great game. He’s a great hitter and seems to never to be beaten to the ball. He’s listed as 5’5” and 160 pounds but he plays like a 6’4”, 200 pound pro. “He has a tremendous amount of heart, so what he makes up for in size, is how much heart plays with,” said Coach Wall. “ He’s a phenomenal competitor, he plays like that every play of practice and it’s not just in games, he’s out there flying around. He’s just a great kid to have in the program and we are fortunate to have him.”

North Reading did not get on the scoreboard until their first offensive drive of the second half with a 6-play, 70 yard drive that included two runs by junior running back Matt McCarthy, who would conclude the drive with a four yard touchdown run. An Angelo Disanto extra point tied the game, 7–7.

McCarthy again had a great game on the ground, as he ran for 242 yards on 34 carries, good for an average of 7.1 yards a carry on the night.

The score was tied at 7 throughout the second half and it looked like North Reading was going to take lead with about 5 minutes to play but Triton stripped the ball from McCarthy on the Viking 4 yard line. The only good thing was that it backed up the Vikings in their own territory and they could only manage three plays and one yard before running out of downs, so the Hornets forced them to punt from their own 5. The punt return was successful for the Green and Gold as McCarthy took it in at the Triton 45 and ran all the way down to the 2 yard line. McCarthy on the very next play punched the ball into the end zone with just 1:39 left in the game. Disanto’s extra point try went through the goal posts to give North Reading a 14–7 lead.

The Vikings had one final chance to answer back but could not do anything again thanks to the smart and tough Hornet defense and went four–and–out on the drive to conclude the ballgame.

The Green and Gold are 5–1 (2–1 in the Cape Ann League’s Kinney Division) and will finish the scheduled regular season tomorrow night at home against the Newburyport Clippers, another team, like Triton, that has given the Hornets problems in the past. Their ticket is already punched to the MIAA Division 4 high school football playoffs.

Game time is at 7 p.m. at the Arthur Kenney Athletic Field.