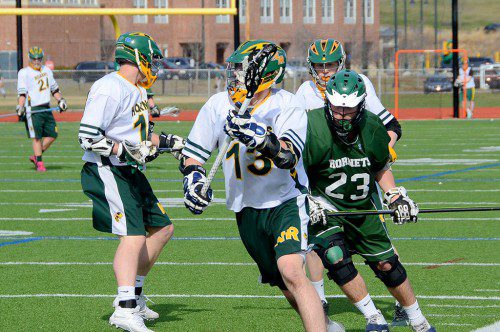 SOPHOMORE JACK SCHILLE (13), advances the ball against the “other” Hornets from Manchester–Essex. (John Friberg Photo)

Led by senior Sean McGreal’s astounding 9 point afternoon, (5 goals, 4 assists), the Hornets hammered the Swampscott Big Blue 19–6 on April 20. The team is off to an 8–2 start on the  season.

Junior Nate Distasio had a great performance of his own with 3 goals and 3 assists. Senior captain Shane Bartlett and junior Nick Day both had 5 point games. Day scored 4 goals and 1 assist and Bartlett added 1 goal and 4 assists.

The Hornets pounced on the Big Blue in the first quarter racing out to a 7–0 lead. North Reading continued to pound Swampscott in the second and third quarter and took a massive 18–4 lead into the fourth. The Hornets were on cruise control in the fourth and coasted to victory.

The Hornets continued their great play with an 8–2 victory over the Bishop Fenwick Crusaders on April 22. Sean McGreal had a second straight great performance with 2 goals and 4 assists. Nick Day and Nate Distasio chipped in with 2 goals apiece.

It was a was a fast moving first quarter and North Reading held a slim 2–1 lead after one. The Hornets took control in the second quarter. Just 48 seconds into the quarter sophomore Jack Schille scored to ignite the offense. Under a minute later at the 10:18 mark Day made it 4–1. On the play, senior Jared Potter picked up a ground ball and found Day who deked the goalie and finished off the goal. McGreal would add a goal at 4:38 to give the Hornets a 5–1 halftime lead.

North Reading added to the lead in the third. With the score 6–1, Day scored a beautiful goal launching a rocket to the top corner of the net at 6:10. The Crusaders added a man up goal late in the quarter but the lead was still 7–2 after three. The Hornets continued to stifle the Bishop Fenwick offense in the fourth quarter. They kept the Crusaders off the scoreboard and NRHS added a goal to make it an 8–2 final.

Junior captain and goalie Nick Ponte’s tremendous 14 save performance was the key to the Hornets’ 6–2 victory over the Dracut Middies on Thursday afternoon.

Nate Distasio had a game high 2 goals and one assist. Shane Bartlett and Sean McGreal both chipped in with one goal and 2 assists apiece.

It was defensive struggle in the first half. Both teams only scored twice in the entire half and it was tied 2–2 at the break. North Reading kept the Middies offense off the scoreboard in the second half. The Hornets scored four times in the half and went on to the 6–2 victory.