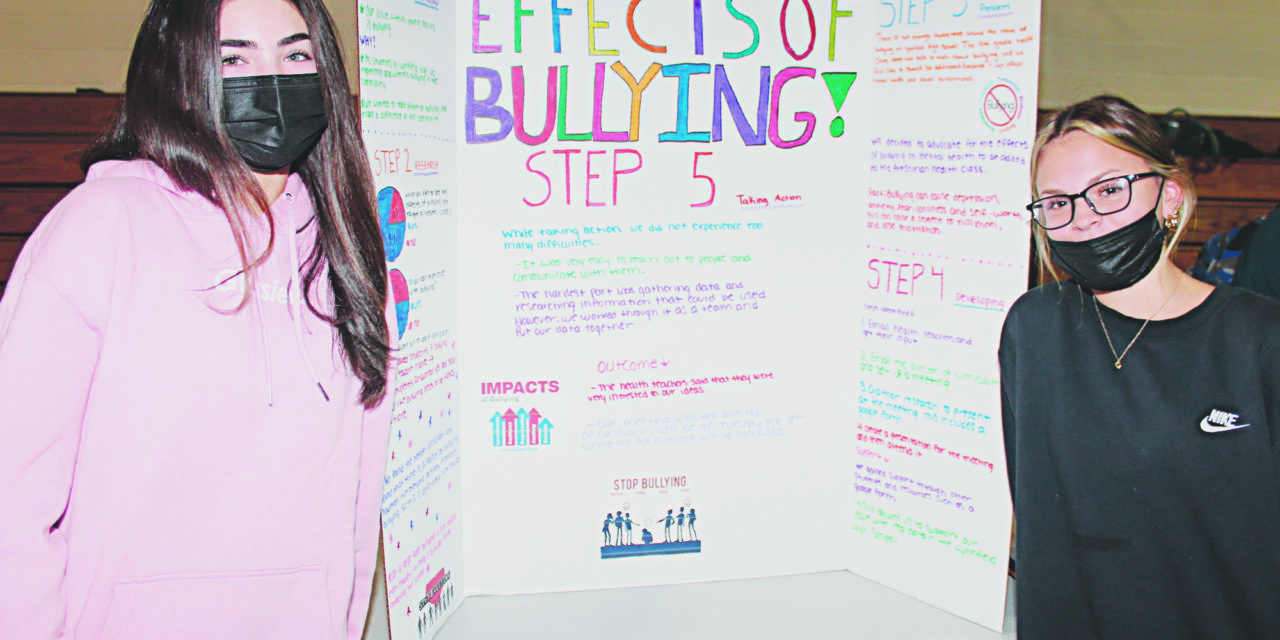 Lynnfield High has implemented the Civics Action Project for the first time this year. The project was initiated after Gov. Charlie Baker signed into law “An Act to Promote and Enhance Civic Engagement” three years ago. The law requires public high schools and middle schools to offer a nonpartisan civics project to students.

History teachers Jen Goguen and David Forster worked with Department Head Sue Breen and Merrimack College graduate fellow Brian Holihan in order to get the Civics Action Project off the ground. Goguen noted that half of the Class of 2024 worked on the projects during the first semester as part of the United States History 1 curriculum. She said the remaining members of the sophomore class started working on the projects this week.

Goguen said the History and Social Science Department administered a survey to sophomores before they were assigned into groups.

“We asked the students what they were interested in, and students were grouped together based on their interests,” said Goguen. “Those groups started with a big idea, and Brian and I helped the students narrow those ideas down into something that was smaller and more manageable.”

Holihan, who is overseeing the projects, said the purpose of the first-year initiative is to teach students the importance of civic engagement.

“The project seeks to teach students civic advocacy skills such as using their voice to address a social issue,” said Holihan. “We are also teaching students the correct and proper ways to go about that process.”

The 15 groups covered a variety of topics as part of their nonpartisan projects. The topics included bullying, cyberbullying, mental health, and diversity and culture. There were also groups of students who undertook projects pertaining to environmental issues such as tree preservation, eliminating food waste and littering. There were also projects about food insecurity, METCO and technology addiction.

“We picked bullying because we don’t think there is enough awareness about it at the high school,” said Mihalchik. “Our goal is to prevent bullying from happening.”

Sokop said the group sent State Rep. Tami Gouveia (D-Acton) an email about their project. He recalled that she has filed a bill that would amend state law by allowing students to take excused absences for mental or behavioral health reasons.

Gouveia attended the Civics Action Project Winter Showcase in order to show her support for the students.

“We decided to undertake this project because we feel there is a lack of education about diversity and culture,” said Qazafi. “We want more of that and we want more representation in our town.”

Qazafi and her group reached out to the Lynnfield Public Library and Lynnfield for Love in order to discuss the possibility of hosting a cultural day event.

“It would educate people in our town about different cultures,” said Qazafi. “If we educate more people about diversity and culture, it will make our community stronger.”

“We started a Tree Club in order to help with the environmental issues in Lynnfield,” said Buccilli. “Our goal is to plant three trees each year in order to help replace the trees that have been cut down.”

Kennedy said the group “learned a lot about the environmental issues in the world such as the loss of habitat” while undertaking the project.

“The population in Lynnfield is growing so much that a lot of trees are getting cut down so that houses can get built,” said Kennedy.

Goguen was incredibly impressed by the students’ projects.

“Students were able to dive into an interest of theirs and were able to learn more about something they are passionate about,” said Goguen. “Students learned how to reach out to community members in order to advocate for change depending on their topic. The students did a really awesome job presenting their findings and learning how to implement change. It’s a wonderful experience for students.”

“I was impressed with how willing and engaged the students were with analyzing their community,” said Holihan. “They did a great job looking at the issues as a whole and finding ways to address those issues whether it’s at the high school or in the town. The students are very passionate about their topics.”

Superintendent Kristen Vogel commended the sophomores for undertaking the projects.

“I was so impressed with the research and presentations of all of the students,” said Vogel in an email. “It was evident that they had done a significant amount of research on their topic, had analyzed the data and created action plans. And every member of the group took ownership and was able to speak to an aspect of their topic. The projects are terrific examples of student choice and voice in learning.”

“It’s great to connect directly with students who are engaged and passionate about the work they are doing,” said Sjoberg. “Each student group I spoke with shared their Civics Action Projects’ detailed process, level of engagement and future steps. It was really impressive.”

“The Lynnfield High School sophomores did an outstanding job with their social advocacy presentations at the Civics Action Project Winter Showcase,” said Jones in an email sent to the Villager. “I had the opportunity to speak directly with many of the students about their projects and really enjoyed the thoughtful conversations we had on topics ranging from mental health and food insecurity to the environment and cyberbullying. This forum highlighted the terrific civics-focused work that is taking place in the Social Studies Department and helped shine a light on the many diverse talents and interests of the students at LHS.”

The high school will be holding the Civics Action Project Spring Showcase later this academic year.