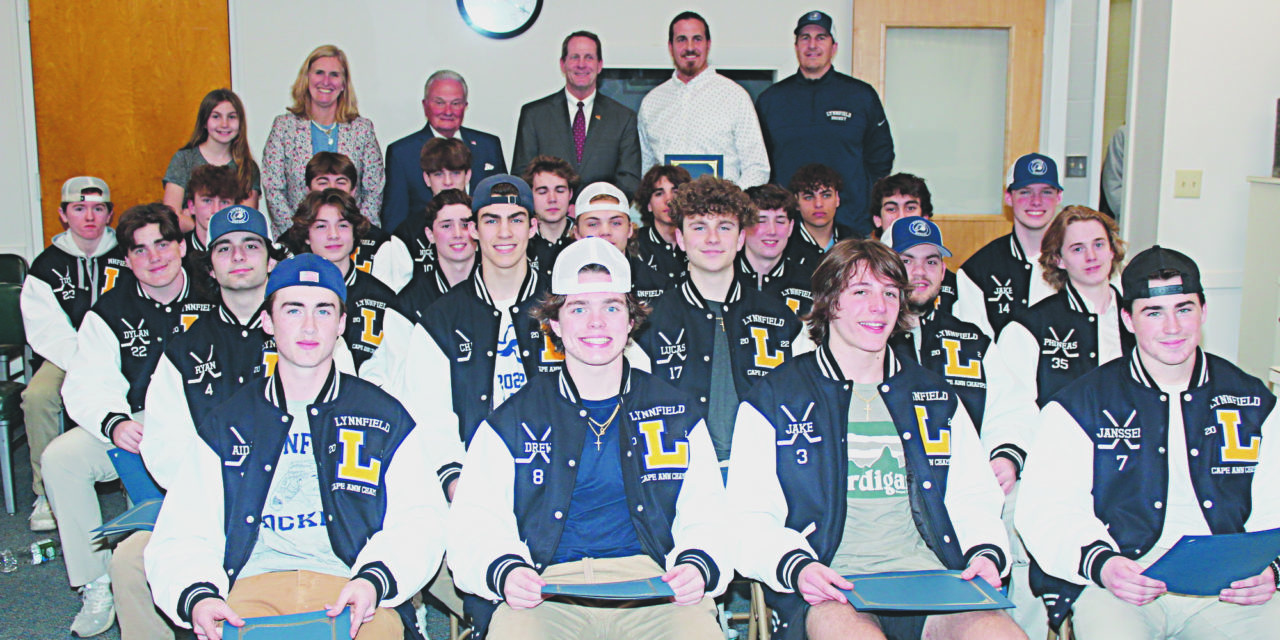 THE SELECT BOARD honored the Lynnfield High boys’ hockey team for advancing to the Division 3 Final Four during a recent meeting. (Dan Tomasello Photo)

LYNNFIELD — The Select Board honored the Lynnfield High boys’ hockey team for a season to remember during a recent meeting.

Boys’ hockey head coach Jon Gardner recalled that the Pioneers concluded the 2021-2022 Division 3 season with a 19-4-1 record. The Pioneers qualified for the Division 3 state tournament, and advanced to the Final Four. Lynnfield fell 3-2 to Marlborough in the state semifinals.

“This was a special season,” said Gardner.

Gardner noted that the Select Board’s meeting in the H. Joseph Maney Meeting Room at Town Hall was around the corner from the Meeting House. He said the Pioneers’ jerseys have patches of the Meeting House on them.

“It’s fitting because there were times this season where we felt like we had the weight of the town on our shoulders,” said Gardner. “It was not a negative thing. It was our responsibility to deliver for the community. The town was amazing. We had 6-year-olds who play youth hockey to guys who played in the 1960s cheering us on. We did our best to get all the way to TD Garden, but we fell just short.”

Gardner said the community’s support for the Pioneers was “incredibly humbling.”

“We will be forever thankful for that,” said Gardner. “The word humble was one of the words we talked about at the start of the season. It fueled our guys and they just kept going. They wanted to come through for everyone in town.”

Gardner said playing for the LHS boys’ hockey team is “part of something that is bigger than yourself.”

“That was evident when we saw the support from the town,” said Gardner. “We want to offer our deepest heartfelt thanks to the town for the support we received.”

Gardner said the Pioneers set some “lofty, lofty goals” at the start of the season.

“We knew this was a special group, and they nearly obtained all of their goals,” said Gardner. “We had 19 wins and scored over 100 goals. There was one point of the season where we went 10-0-1. We went half of the season before losing.”

“We were down 2-0 in both games and game back to win both games,” said Gardner. “We won the Cape Ann League championship for the first time since 2005, which is way too long for a proud hockey community. We made it all the way to the Final Four. We had all of the trophies and the hardware at our end of the season banquet. It’s nice and important to get those accolades, but the way the guys conducted themselves was the biggest thing. The guys were always prepared, paid attention to details and learned from their mistakes because they didn’t want to repeat them. They wanted to fix them.”

Gardner said the Pioneers had a “great work ethic and had a lot of passion on and off the ice.”

“They pushed themselves as teammates,” said Gardner. “They were fierce competitors and played for each other, which is important. There were so many acts of selflessness throughout the season, and the team had a ‘we over me’ mentality that propelled us through a tough schedule and a lot of obstacles. These guys were resilient and were mentally tough. They were a great group to coach. I am very proud of them.”

After Gardner concluded his remarks, he was given a round of applause.

Select Board Chairman Dick Dalton recalled that he went to almost every one of the Pioneers’ games to watch his grandson, Lucas Cook, and his teammates play.

“Every game was intense,” said Dalton. “It was great two-way hockey. There are teams that can score a lot of goals and make fancy passes, but what impressed me was the forechecking. It was outstanding. That takes hard work and commitment, and this team showed it on both ends of the ice. It was a real team working together. The team has a lot to be proud of, and all of you will have great memories that will last a lifetime. You guys will be talking about some of these games at your 20th high school reunion. The town is incredibly proud of all of you.”

While Select Board member Joe Connell was unable to attend the meeting because he was on a business trip, he said watching his son Jake and his teammates take the ice this year was a pleasure to watch.

“I am very pleased with the success of the 2021-2022 Lynnfield Varsity boys’ hockey team,” said Connell in an email sent to the Villager. “It was a remarkable season, and these young men gave us great memories this year. It was so fun to watch, and the pride they gave this great town is immeasurable. It wasn’t by chance, but through the great coach Gardner and his entire coaching staff. We also had a great set of captains and assistant captains: Chase Carney, Janssen Sperling, Will Steadman, Aidan Burke, Drew Damiani, and Patrick Barrett. These young men did remarkable things on and off the ice. Their leadership and cohesiveness permeated through the entire team, which resulted in a band of brothers. I can’t say enough how difficult it is to be a student-athlete, and this team accomplished it all. Go Pioneers!”

Dalton also read a citation during the meeting that recognized the Pioneers’ accomplishments this year.

“The team’s remarkable 108 goals scored versus only 47 goals allowed – a differential of +61 – reflects a remarkable level of offensive and defensive talent, and teamwork that led the team to a berth in the Final Four of the Massachusetts Division 3 state tournament,” said Dalton. “These laudable accomplishments are a reflection on the dedication of the athletes, coaches and parents whose commitment and effort is necessary for such high achievement.”

“All of you demonstrated high levels of skill, dedication and sportsmanship that stand as a credit to the team, the league and the community,” said Dalton. “We, the Select Board of the town of Lynnfield, do hereby offer our congratulations and those of the town for their achievements.”

After the Pioneers were given their citations, the large crowd in attendance gave the icemen a round of applause.