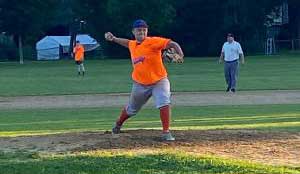 Unknowns pull even with Slappers after 9-3 win

BRETT MALONEY shut the door on the Slappers with five strikeouts. (Courtesy Photo)

WAKEFIELD — Things have gotten a lot tighter at the top of the Wakefield Twi League standings.

Two points separate the No. 1 seed Brewers from the Slappers and the Unknowns who are tied for second place.

The resurgent Highlife have climbed up into the fourth and final playoff spot with two, one-run wins last week as the final week of the Twi season gears up today.

And the reason the top of the standings is so close is because the Unknowns used two good pitching performances from Tom Caron and Brett Maloney to defeat an undermanned Slappers team 9-3, Friday night at Moulton Park.

Slappers’ starter Brian Tartarini (7hits, 4 Ks) got the opening call and promptly struck out the first two Orange hitters in the 1st inning. But things unraveled from there. Kevin Murray got hit by a pitch and stole second base. Geoff Eriksen then ripped a line drive single to right field to knock in Murray for the first run of the game. Sean Alexander followed with a gap shot to left center field that allowed Eriksen to scamper all the way home for the second run.

The Slap responded to the Orange’s opening salvo by getting a run back in their half inning. Anthony Funchiella got on by an infield error and moved to second base on a ground out. Jake Baressi then scorched a hit up the middle, off Unknowns’ starter Tom Caron (6 hits, 4 Ks), to plate Funchiella and make the score 2-1.

The Question Marks broke the game open in the top of the 4th inning.

Alexander walked, Chris Porter blooped a hit to right field and Bryan Butt singled to load the bases. Tartarini induced an infield pop up for the second out, but Caron would not be denied in his at bat as he laced a single down the left field line for an RBI. Ian Power then bounced a one-hopper to Funchiella at second who gunned down the runner from third at home for the second out of the game. Leadoff hitter “Wub” Power came through in the clutch by dropping a perfectly placed hit to short right field that scored Butt and Caron. Maloney was then walked to load the bases.

Unknowns’ catcher Murray then patiently worked a walk to force in the Coach Ian Power to make the score 6-1.

The Orange would tack on three more runs in the top of the 5th inning.  Alexander and Porter reached via a walk and HBP from reliever Nick Porter. After a wild pitch moved the runners up, Chris Alden sliced a single to left field knocking in Alexander.

Porter plunked Caron with a pitch and then uncorked a wild pitch allowing pinch runner Brandon Baeringer to score.

Baressi then took over the mound during a pitching change and faced 38-year Twi League veteran Moe Maloney. Maloney tapped a grounder to short, which the fielder couldn’t handle thus allowing Caron to score the ninth run of the game.

The Slappers mounted a small comeback in their half inning against Caron.  Dave Holman punched a single to right field and Matt Rej followed with his own single. A wild pitch moved the runners to second and third base.  Funchiella then unloaded a long drive to left center field for a double to score the runners and knock Caron out of the game.

The Twi-leading Brewers, who cruised past the Expos 12-2 on Thursday night, will meet the Unknowns tonight, 5:45 p.m. at Moulton.

In one of the bigger games of the week, the Highlife will have an opportunity to essentially punch a playoff ticket when they meet the Expos on Thursday, 5:45 p.m. at Moulton.