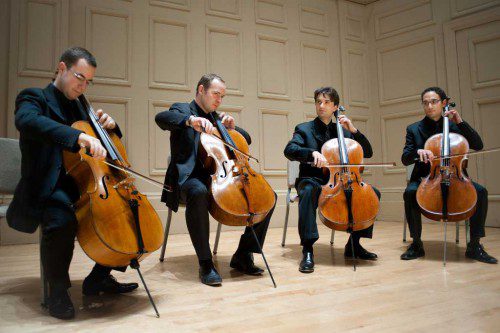 The Boston Cello Quartet (BCQ) was founded in 2010 by Boston Symphony Orchestra cellists Blaise Dejardin, Adam Esbensen, Mihail Jojatu and Alexandre Lecarme. They have performed for diverse audiences from Tanglewood to Fenway Park, with many stops in between. Fanfare Magazine referred to the “superb music making” of BCQ, and their “suave and polished playing, with absolutely stunning phrasing and technical precision.”

Since its auspicious debut concert, the BCQ has quickly won the hearts of music lovers through their own arrangements of staples of the classical music repertoire, as well as jazz, contemporary works and even comic medleys, all which showcases the limitless possibilities of the instrument they love. Favorites of the Tanglewood audience, the quartet opened for the Grammy Award-winning rock band Train at the Koussevitzky Music Shed in 2011 and two years later was featured as a solo group for Tanglewood on Parade, performing the James Bond Concertino with the Boston Pops and Keith Lockhart.

In September 2013, the Boston Cello Quartet became the first chamber music group to be featured on ESPN and MLB.com, performing the National Anthem and Metallica’s song Enter Sandman at Fenway Park, in honor of baseball legend Mariano Rivera.

Their first album, Pictures, was released in February 2013 and quickly rose to the Top 50 Classical Music Albums on iTunes. The Boston Cello Quartet also recorded Olivier Deriviere’s soundtrack for the videogame Of Orcs and Men, released in 2012 on Xbox 360, PS3 and PC. Their program on Oct. 18 will include selections from their new, Latin-themed album, due out in the winter.

Other concerts in the SRO series include A Candlelight Christmas on Sunday, Dec. 20 at 7 p.m., featuring vocalists Joseph Holmes, Carissa Scudieri and Rachele Schmiege; The Tenor of Love on Valentine’s Day, Sunday, Feb. 14 at 7 p.m. with the New England Tenors; and Atlantic Seaway, an ensemble specializing in Scottish Roots music, on Saturday, April 18 at 7 p.m.

Season subscriptions are still available and can be ordered online at www.ticketpeak.com/sro or by mail (check to “Wakefield UU Church”) sent to SRO/Wakefield UU Church, PO Box 529, Wakefield MA 01880. For the best subscription seats, please call 339-203-9366. For additional information on the upcoming season, visit www.sroconcerts.org.