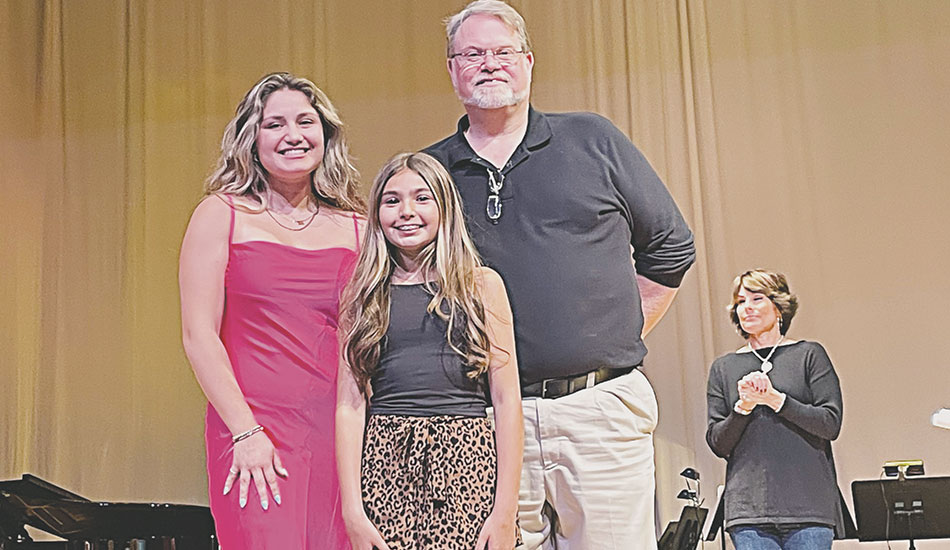 LYNNFIELD — Three singers were crowned as champions of the Lynnfield Idol competition in the high school auditorium on June 6.

There were 12 singers who competed in the Lynnfield Idol competition, which raises money for the Lynnfield High School Music Department. The event, which was last held in May 2019, featured a standing-room only crowd in the auditorium.

LHS junior Giuliana Guarracino won the High School Division. Guarracino, who previously won the competition when she was in sixth grade and eighth grade, performed “Dov’è l’amore” by Cher during the first act and “A Sunday Kind of Love” by Eta James during the second act.

“It feels great,” said Guarracino in an interview with the Villager. “It was a really fun competition and everybody did a really great job. All of the participants should be really proud of themselves. Lynnfield Idol is a great way to bring the community together through music.”

“You are a fantastic performer,” Nascembeni said after Guarracino sang ‘Dov’è l’amore.’ “You rocked it.”

Producer/engineer Kenny Lewis, who has worked with musicians such as Carlos Santana and Stryper, agreed.

“Your performance was very mature for a high school student,” said Lewis. “Your vocals sounded great and you had great stage presence.”

Former Berklee College of Music professor Karen Carr, a vocal coach who has worked with artists such as Alicia Keys and Lionel Ritchie, concurred with Nascembeni and Lewis’ sentiment.

“I loved your tone,” said Carr.

“It feels great,” said Dorman about winning the Middle School Division. “It was a lot of fun.”

“You never cease to amaze me,” said Nascembeni. “You have great range and a pretty tone.”

“You did an amazing job,” Lewis added.

LHS Choral Director Doug Hodgkins won the Faculty Division of Lynnfield Idol. He performed “Bus Stop” by The Hollies in the first act and “Please Don’t Ask” by Genesis in the second act.

The High School Division also featured sophomore Maria Chambers performing “Honey, Honey” by ABBA during Act 1 and “Flowers” from the musical “Hadestown” during Act 2. Freshman Bella Carroll sang “Over the Rainbow” from “The Wizard of Oz” in the first act and “I Wanna Dance with Somebody” by Whitney Houston in the second act.

Junior Sarah DeGennaro performed “Dreams” by Fleetwood Mac in Act 1 and “Cry Me A River” by Justin Timberlake in Act 2. Sophomore Janhavi Joglekar sang “Love In the Dark” by Adele in the first act and “The Way It Was” by The Killers in the second act. Freshman Paige Martino performed “She Used to Be Mine” by Sara Bareilles in Act 1 and “The Climb” by Miley Cyrus in Act 2.

In addition to Dorman, the Middle School Division featured eighth-grader Heavenly Claypool singing “All of Me” by John Legend in Act 1 and “Diamonds” by Rihanna in Act 2. Eighth-grader Mallory DiSilvio performed “Something’s Got a Hold on Me” by Christina Aguilera in the first act and “Love on the Brain” by Rihanna in the second act. Eighth-grader Jerusha Robins sang “Dangerous Woman” by Ariana Grande in Act 1 and “Girl on Fire” by Alicia Keys during Act 2.

Huckleberry Hill School special education teacher Curran Pope-Konner was the runner-up to Hodgkins in the Faculty Division. She performed “Jolene” by Dolly Patton in the first act and “Always Remember Us This Way” by Lady Gaga in the second act.

“These performances were absolutely outstanding,” said Nascembeni. “Everyone should be really proud of themselves.”

“All of you did a wonderful job,” said Carr.

The 12 performers were accompanied by a band featuring Doug Hodgkins on piano, LHS Band Director Harry Wagg on guitar, Bruce Weaver on bass and Roger Hodgkins on drums. LHS Class of 2022 graduate Peter Accardo played piano on several songs during the set.

LHS sophomore Madison Danese and LHS junior Sophia Faro served as the masters of ceremonies of Lynnfield Idol. Danese and Faro asked the 12 singers different questions after each performance.

Nascembeni gave each singer a pair of tickets to “Smokey Joe’s Café” at North Shore Music Theatre. She also urged all of the singers to listen to the feedback that the three judges gave them.

“I hope all of you were completely open to the feedback,” said Nascembeni. “That is where the learning comes from. Karen Carr and I were talking earlier about how a lot of music professors at colleges are being asked to coddle students today, and they are not being honest with them. The growing comes from learning and feedback. Don’t ever take it to heart. Use it to take yourself to the next level. I am stunned by the talent in this little town. Bravo!”