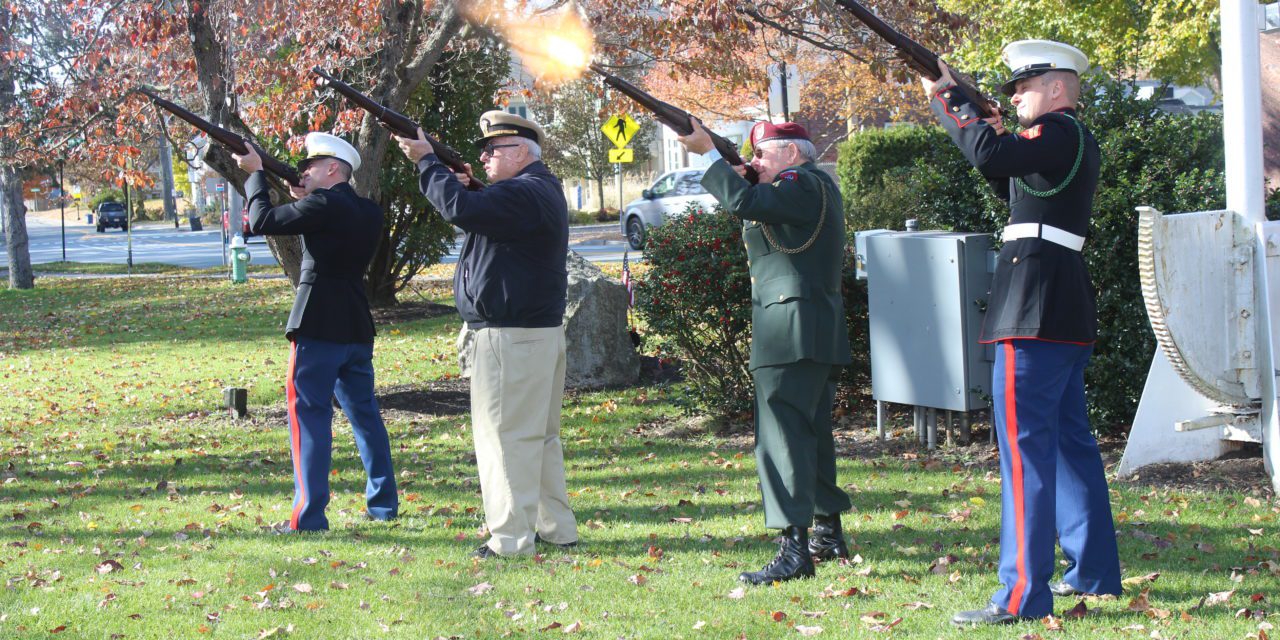 LYNNFIELD — Over 400 residents came together on the Town Common to salute America’s heroes during the Veterans Day ceremony on Nov. 11.

Last Thursday’s event was the first in-person Veterans Day ceremony in two years, as the COVID-19 pandemic forced the town to hold virtual Memorial Day and Veterans Day ceremonies over the past year-and-a-half. In addition to the traditional ceremony held on the Common, the Lynnfield Moms Group, North Shore Car Club, Police Department and Fire Department hosted a Veterans Day parade that drove around town and made stops at Colonial Gardens and Sunrise Assisted Living.

Veterans Services Officer Bruce Siegel organized the ceremony on the Town Common and served as the master of ceremonies once again.

“Today we honor we honor our veterans who are steadfast in their beliefs in serving this great nation,” said Siegel. “We thank our warriors of today for continuing to fight for our freedom. You took an oath before God and country to protect the borders of this great nation. We humbly thank you for your service, bravery and sacrifice.”

Siegel encouraged the ceremony’s attendees to honor veterans every single day and thank them for their service.

“It is because of veterans’ bravery and sacrifice that we are the Land of the Free,” said Siegel. “Veterans Day honors and celebrates veterans for their patriotism, love of country and willingness to serve and sacrifice for the common good. Veterans Day is a day set aside to thank all of those who served honorably in the military in both wartime and peacetime. In fact, Veterans Day is largely intended to thank living veterans for their service and to acknowledge that their contributions to our national security are appreciated. All of those who served have sacrificed and performed their duty. Born of their extraordinary accomplishments comes our extraordinary debt. And for those accomplishments, we must always be grateful.”

After townspeople recited “The Pledge of Allegiance,” Middle School Music Director Stephen Bloom led middle and high school band students during a performance of “The National Anthem.” High School Band Director Harry Wagg also led the music students while they performed a medley of military songs for the Navy, Army, Marine Corps, Air Force and Coast Guard. The ceremony’s attendees gave the students a round of applause.

“We are seeing differences and divisions in our community,” said Rev. Bacon. “We see people getting angry with each other over things such as politics, COVID policies and how we go about educating our children. In this time of difference, God help us learn from our veterans, those people who figured out how to put aside all of their differences so that they could come together as one to serve this nation.”

“Throughout our nation’s history, generations of Americans have answered the call to serve our country and to help preserve and strengthen the many freedoms we hold dear,” said Jones. “Veterans Day provides an opportunity to honor and thank those who served, but a single day set aside each year does not even begin to adequately reflect the debt all Americans owe to our veterans, a debt that can never truly be repaid. We must never lose sight of the fact that veterans deserve our respect and thanks each and every day. Thank you to all who served and their families who shared in their sacrifices.”

Jones said it is important for the country, state and community to always support veterans’ needs. He recalled that a number of veterans have experienced struggles with mental health, substance use, suicidal thoughts and “the other invisible wounds of war that might not be so obvious.”

“We must always prioritize the needs of our veterans and their families,” said Jones.

State Sen. Brendan Crighton (D-Lynn) thanked veterans for “putting their lives on the line to protect our country.” While he said the State Legislature is comprised of 200 members with different political viewpoints, Crighton said supporting veterans is an area where lawmakers can find common ground.

“In Massachusetts, I am proud to say we have some of the strongest benefits for our veterans, but we can do more,” said Crighton. “In this legislative session, we are looking to improve the benefits for our veterans. We recognize that their families make a sacrifice as well. In America, our service men and women are asked to relocate every 24 to 36 months. Throughout a service member’s career, they will relocate six to nine times. That is a tremendous disruption for so many who are already sacrificing so much. We should do all that we can to help those families have an easy transition. There is a lot more work we can do for our veterans in Massachusetts, and we are committed to doing so.”

Select Board member and retired U.S. Army Col. Joe Connell gave the keynote address during the Veterans’ Day ceremony. He thanked the 400 residents for attending the ceremony.

“Veterans truly appreciate your support and kindness,” said Connell. “Veterans Day is a time to thank those who are serving or who have served. I want to thank my fellow veterans for dedicating their lives to serve this country. This country would not be what it is today without you. And from the bottom of my heart, I can’t be more appreciative and thankful for being a part of this group.”

Connell also thanked veterans and armed services members’ families and friends for the sacrifices they have made while supporting veterans.

“We would not be where we are today without you,” said Connell. “Veterans Day is a day of honoring veterans. From our earliest American days, veterans have been the foundation of building character in the fabric of this great country. Veterans of today and of the future will continue on with this legacy.”

“Bruce puts a lot of time and effort into our Veterans Day and Memorial Day events,” said Dalton. “The events are always well organized and are structured to reflect the town’s respect and gratitude for our veterans. Thank you Bruce for all that you do.”

Dalton said Veterans Day is an opportunity for Americans to “honor these ordinary people who have done something extraordinary so that we may all enjoy the freedom we treasure today.”

“Our debt to these men and woman can never be re-paid, but our gratitude and respect must last forever,” said Dalton. “For many veterans, our nation was important enough to endure long separations from their families, miss the births of their children, freeze in subzero temperatures, bake in wild jungles, lose limbs and, far too often, lose their lives. Military spouses have had to endure career interruptions, frequent changes of address and a disproportionate share of parental responsibilities. Children often had to deal with changes in schools, separation from friends and, the hardest of all the uncertainty of whether mom or dad will live through their next combat tour. Veterans chose to set aside their personal ambitions and dreams to assure the well-being of our great nation. Veterans have given us our freedom, and it is impossible to put a price on that. We owe them our thanks. We owe them our respect. And we owe them our freedom.”

The ceremony concluded with Girl Scouts leading attendees during a performance of “God Bless America.” Townspeople gave the Girl Scouts a round of applause. Attendees were also enjoyed lunch provided by the town.