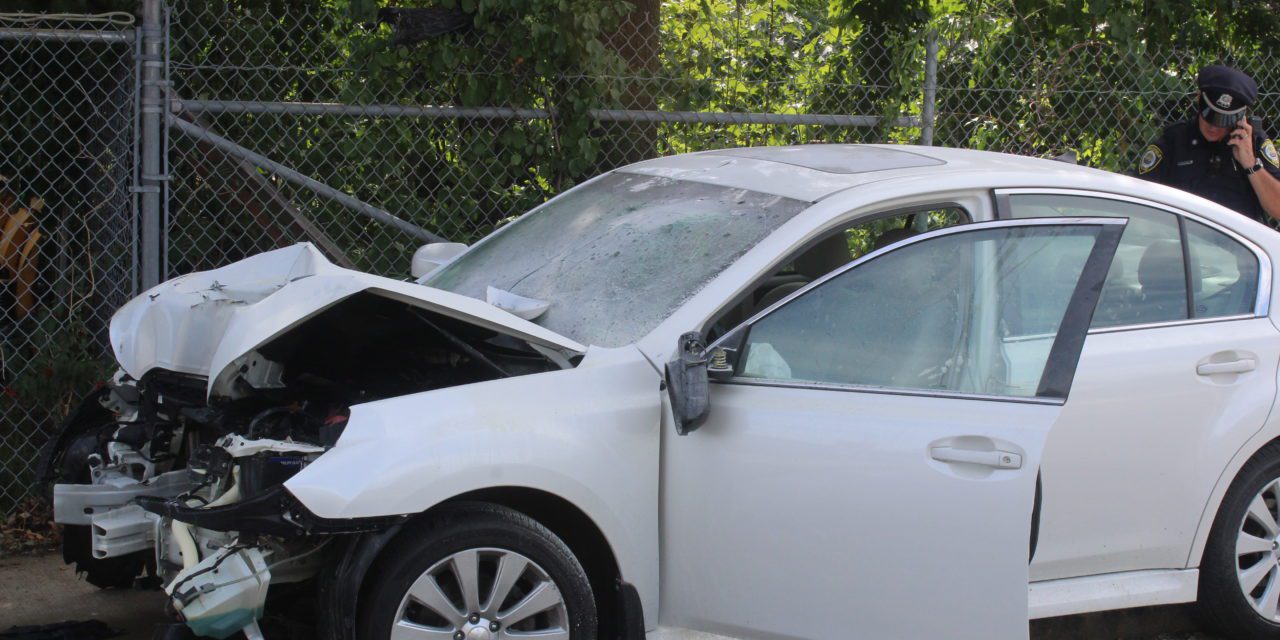 A 2011 SUBARU Legacy crashed into a pole on North Avenue near the Galvin Middle School at around 3 p.m. yesterday. The driver, a 51-year-old Wakefield woman, may have suffered a medical issue and did not survive the crash. (Dan Tomasello Photo)

WAKEFIELD — A 51-year-old Wakefield woman unfortunately did not survive after the car she was driving crashed into a utility pole on North Avenue yesterday afternoon.

Police, Fire and Cataldo Ambulance rushed to the scene on North Avenue across from the Galvin Middle School at about 3 p.m. Upon arrival of first responders, a citizen had already pulled the driver from the vehicle. Shortly after their arrival, the woman went into cardiac arrest, according to Fire Chief Michael Sullivan, and first responders initiated CPR. The woman was taken to a local hospital with serious injuries but did not survive.

Police believe that a medical issue may have caused the accident, which is still under investigation.

According to police, the 2011 Subaru Legacy was traveling on North Avenue heading toward Main Street when the car veered to the right and struck the pole. Shortly after the crash, a fire started in the engine compartment, which the Fire Department extinguished.

A State Police accident reconstruction team remained on the scene for some time after the crash.

A 23-year-old Lynn woman will be summonsed to court for unlicensed driving following a two-car crash at Water Street and Montrose Avenue yesterday at around 2 p.m.

According to police, a 2018 Honda driven by a Rhode Island resident was turning onto Water Street from Montrose Avenue as a 2011 Mitsubishi Endeavor, driven by the Lynn woman, was traveling inbound on Water Street from Saugus toward Wakefield when the crash occurred.

An occupant of one of the vehicles suffered an injury from an airbag.

At about 3:45 p.m. yesterday, a police officer was flagged down by a citizen who reported seeing a man running from the Dunkin’ Donuts on North Avenue with blood running down the side of his face. He was last seen running towards Albion Street. Police were able to locate the man who reportedly had been coloring his hair red.

At about 9:30 last night, police received a report of a man lying on the sidewalk in front of McDonald’s on Main Street. Police were able to locate the man and offered him services, which he declined.

The Fire Department responded to 19 calls yesterday. Eight of those were for medical aid.

At about 10 a.m., a Wakefield crew was sent to cover Stoneham Fire Department headquarters as firefighters in that town battled brush fires for several hours.

At about 5:15 p.m., firefighters went to a Pleasant Street address, where a resident was burning brush in his backyard. He was instructed to put out the fire and warned of the danger of outside burning during the current dry conditions.