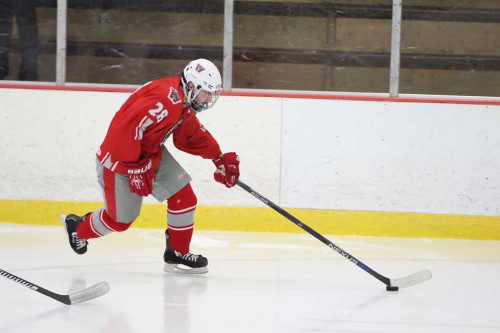 The Spartans and the Warriors skated to a thrilling 3-3 tie as the two teams traded goals late leaving this one up for grabs right down to the wire.

“It was a lot of fun,” Warriors head coach Chris Gianatassio said, “There was a really good crowd, we wanted to get two points but the way we got one it was nice to get one.”

“It was tied but it was a really good way to end,” Gianatassio added. “We ended on a high note.”

“Stoneham is getting better, they weren’t good a couple years ago, but the program is building up and they have some good players.”

It started out well for the Warriors, as they grabbed an early first period lead thanks to PJ Iannuzzi’s fifth minute goal from Zack Kane and Dylan Melanson.

“We went up early,” the coach said, “We really didn’t play that well though, we really had two bad periods.”

The two teams skated to an even first period and with 5:02 to play, Stoneham leveled the score with AJ Sousa’s goal making it 1-1.

Stoneham had some more pep in their step following the goal and had Wakefield goalie Tyler Pugsley not made several fine saves, the score would have been different to start the second.

“Pugsley was awesome, he kept us in it, he played fantastic,” said Giantassio.

With the score 1-1 in the second, Wakefield continued to grind on. It wasn’t their best stretch of play as coach Gianatassio said after the game, “We really didn’t show up for two periods and we were lucky that we were in the game last night.”

The Warriors’ were penalized for their aggressive play as Steve Melanson picked up a cross checking penalty at the 8:10 mark. Stoneham used the man advantage and quickly made Wakefield pay, scoring the go-ahead goal on the power play as Eric Roberts fed Edward Doherty, who beat Puglsey to make it 2-1.

With a deficit heading into the final period, Wakefield had some work to do.

“In the third period the kids really turned it up and showed a lot of character coming back and fighting back,” the coach said,

“Especially at the end because we were all over them but we let up a goal, it was a nice goal with 1:10, and we got deflated but we fought back and tied it up.”

The Warriors came out with a little extra fire to start the third period and were quickly rewarded for their added pressure.

Anthony Funicella broke free and scored the game tying goal for the Warriors, unassisted with 9:25 remaining in the game.

Stoneham took a holding penalty of their own with 7:35 to go but Wakefield failed to turn it into a go-ahead goal for themselves.

As the game toiled on, the two teams vied for supremacy. Stoneham looked to be tipped to take the lead but the stubborn Pugsley wouldn’t concede in the Wakefield net.

Finally Stoneham’s persistence paid off with 1:10 to go, as Billy Burridge found AJ Sousa for the Spartan’s third goal, making it 3-2.

With 30 seconds left,  Gianatassio called for a time out and decided to pull Pugsley and opt for the extra skater.

The move was a gamble, but at that point in the game there is nothing else a team can do. Luckily for the Warriors, they were able to control the puck and put a shot in front of the net. In the resulting scrum for possession, Warriors’ senior Steve Marino was able to find some space between Stoneham goalie Andrew Scarpa’s pads with Dave Melanson and Kane credited with the assists. The goal tied the game at 3-3 with 23 seconds to go.

Neither team would break the tie in the time remaining and the Warriors and Spartans skated to a 3-3 tie.