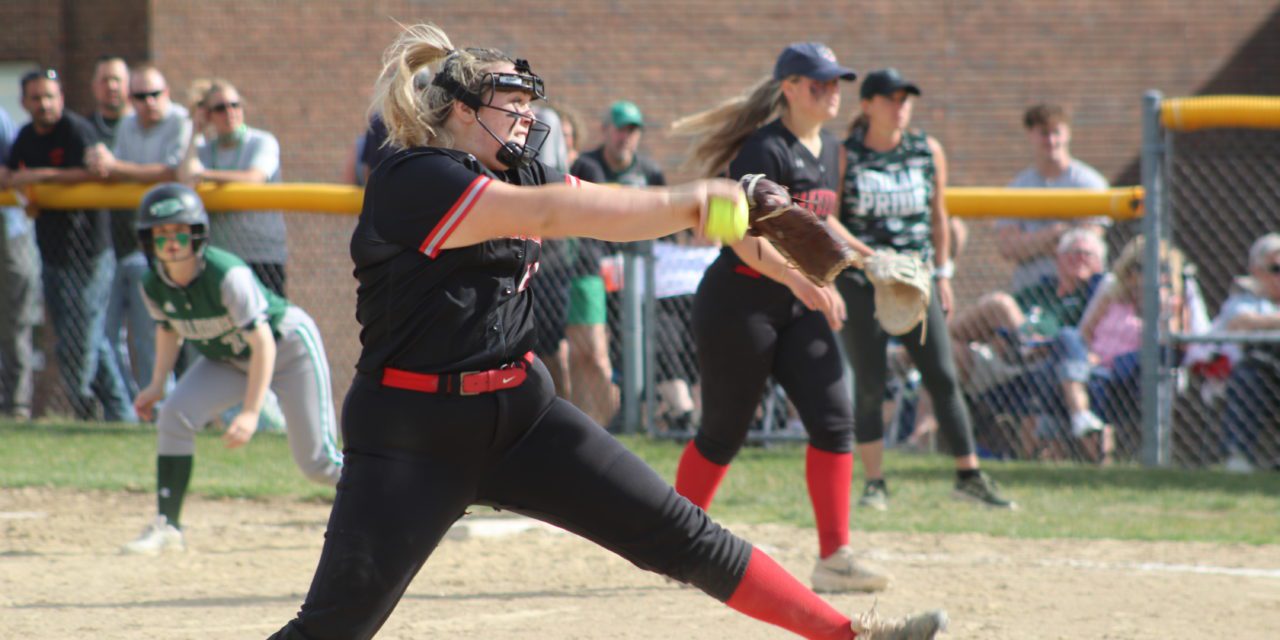 NORA LEACH had three strikeouts and allowed four earned runs in six innings against top-seeded Billerica in a state tournament game last week. The start on June 7, came one day after Leach pitched her team to their first, first round state tournament victory since 2009. (Dan Pawlowski Photo)

BILLERICA — The Wakefield High softball team knew the task would be a monumental one. Not many teams travel to the softball field at Marshal Middle School and bring home a win.

Top-seeded Billerica displayed their talent in all phases of the game in an 11-1 Round of 16 victory on June 7.

“Billerica was certainly good. Number one seed and for good reason,” said Wakefield head coach Chris Tolios. “It was one of those games where we went in to play a really good team and we didn’t play well ourselves and that is never a good recipe. That’s not a team you beat if you don’t play to your highest potential and unfortunately that was the case for us.

“They are a strong team and we would have had to be at our complete best to even think about competing. Credit to them, they are going to give the D2 title a good run.” 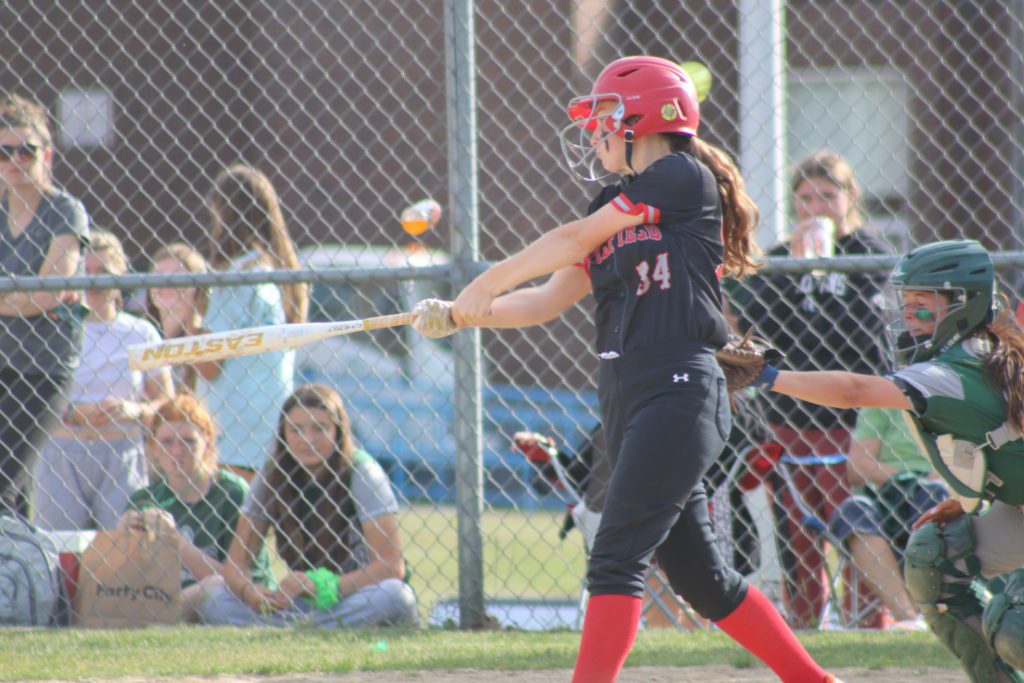 SARA NEMEC follows through on her RBI base hit in the 2nd inning of a Round of 16 matchup in Billerica on June 7. (Dan Pawlowski Photo)

The Indians went on to beat Plymouth North 6-3 at home in the quarterfinals. They will meet No. 4 Westfield in the state semifinals at Worcester State tomorrow at 4:30 p.m.

Wakefield senior captain and ace Nora Leach battled for six innings, surrendering just four earned runs and striking out three.
Billerica led 2-0 after one and Wakefield cut it to 2-1 after two. The home team took off in the 3rd, putting up seven runs with a combination of timely hits and untimely Warrior errors.

To Wakefield’s, and especially Leach’s credit, Billerica was only able to scratch around two more runs over the next three frames.

Leach started the game with a strikeout. Later, a single and a bunt hit put runners at the corners. Wakefield took the out when Billerica stole second with junior Emma Kane making a nice throw from behind the plate but a run came around. Two walks set up an RBI single for Billerica and runners at the corners again with the home team threatening to break it open.

Leach, pitching in windy and dusty conditions with the noise from Billerica’s dugout and fans along the first base line to contend with, came up with a clutch strikeout on a high heater to end the threat.

Wakefield’s rally in the 2nd was started with a leadoff Leach walk. Sophomore Meredith Morris came on to pinch run and she advanced to second on a fielder’s choice. A fantastic catch in foul ground in right off the the bat of senior captain Claire Donahue allowed Morris to tag to third. Junior Sara Nemec came through during a great at-bat, shooting a line drive up the middle for an RBI base hit.

An error on a grounder to start Billerica’s half of the 2nd felt like trouble but Leach struck out the next batter and got a fielder’s choice for out number two. Kane ended the inning on a strong throw down to second to catch a runner attempting to steal. Freshman Kathleen Gmelch put on a great tag while running to the base.

After putting up seven in the 3rd, Billerica added two more in the 4th, extending the lead to 11-1 which would end up being the final.

A bright spot for the Warriors was freshman Jade Waterhouse who reached base twice in three at-bats, walking in the first and slicing a single down the left field line in the 3rd. 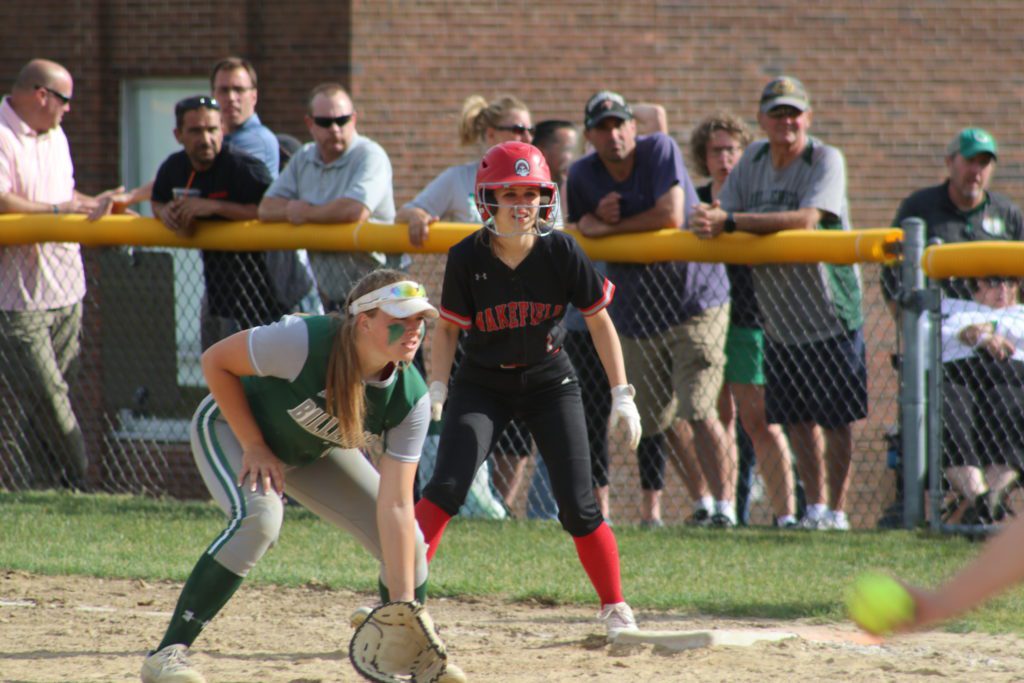 JADE WATERHOUSE got on base twice in three at-bats against top-seeded Billerica on June 7 including a walk and a single. (Dan Pawlowski Photo)

While not the ending Wakefield had envisioned, the overall success of the season will be remembered, something coach Tolios made sure to tell his team immediately following the game.

“My message to the girls was just to be proud of what they accomplished,” said Tolios. “They started to put in the work with their senior-led practices back in November right after Thanksgiving and it culminated in 15 wins, the first tournament appearance in six years and the first (time advancing past the first round) in 13 years.”

The Warriors qualified for their first state tournament appearance since 2016 with a regular season record of 14-6. Wakefield won a preliminary round game in ’16 but lost in the first round, the same fate that befell the 2012 team.

The 2022 Wakefield softball team was the first team since 2009 to advance past the first round, something this year’s squad accomplished with a 7-2 road win over Stoughton on June 6.

The Warriors were a well-balanced team but Tolios was quick to credit his seniors, not just for their success on the field but for the culture they helped create over the years. 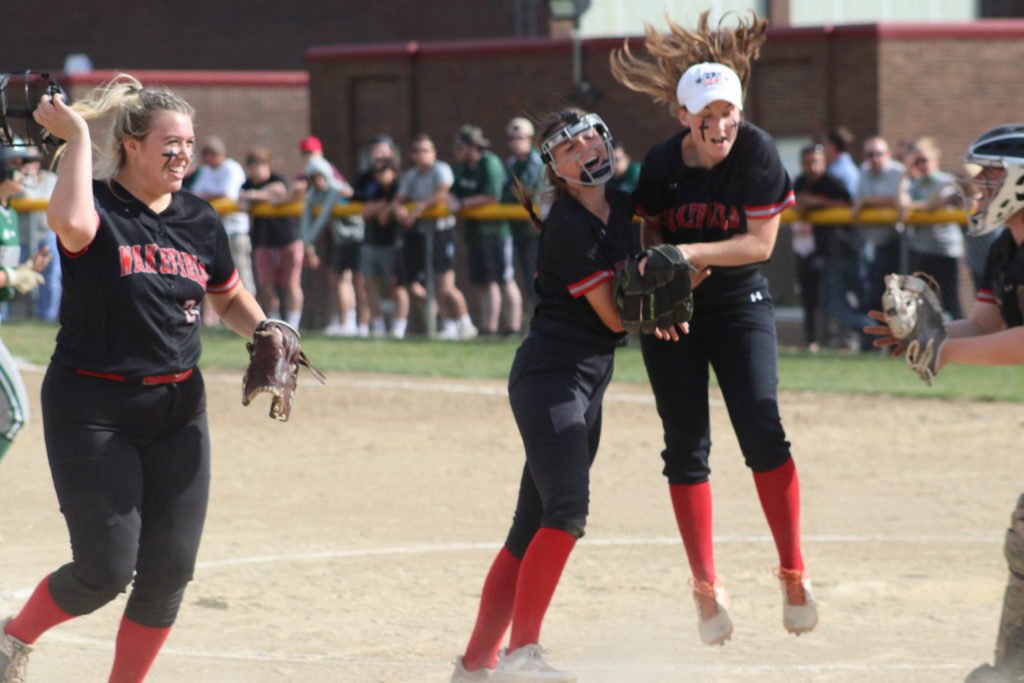 “The seniors have a special place in my heart because they were freshmen when I took the program over back in 2019,” said Tolios. “We had a lot of interruptions in these four years together, obviously, but they stuck to the script and laid the foundation of what it means to be a part of this program and that is putting in the work and continuing to improve, which ended with this, their final season, one that hopefully they will remember for a long time.

“I also think it is a senior class where the underclassmen watched what they did for four years and will start to follow suit, so hopefully the tournament appearance and tournament wins become the norm around here and it will be a credit to this group.”

In addition to captains Leach, Donahue and Allida Kelliher, the Warriors will graduate Olivia Johnsen, Bridget Gmelch and Emma Johnsen.

“I’m going to miss this team, both seniors and underclassmen,” said Tolios. “It was a fun season, they left me with great memories and laughs. As I told them all at the banquet, they are a unique group, one that I wouldn’t change for anything.”