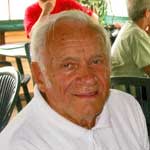 CHELMSFORD — Albert J. D’Agostino Sr., 91, of Chelmsford, formerly of Wakefield and Everett, passed away on March 27.

Al was raised and educated in Everett and was a graduate of Everett High School. He had been a Wakefield resident for the past 36 years and was the co-owner of Gloria’s Food Store in Wakefield with his nephew Angelo Nicolai.

He was a lifelong member of Crystal Community Club and was named their Man of the Year.

Al was passionate about his family and sports. In his younger years he practiced baseball with the Boston Braves.

Al was the beloved husband to the late Edith “Edie” (Gallugi) for 67 years. He was the loving father to his three sons Albert Jr. and his wife Denise of Lynn, Dennis and his wife Diane of Wakefield and Paul and his wife Nancy of Chelmsford. He was the devoted grandfather to Dana, Michael, Deric, Andrew, Danielle, Christopher, Julia and Sofia, all of whom inherited his athletic gift and he was always their number one fan in the many sports they played. He was also the great-grandfather of 11. He was also the brother of Angelo Jr. and his wife Maryann of Pembroke and was predeceased by his siblings, Anthony, William, Fred and Joseph D’Agostino and Mary DiBattista

Visitations for relatives and friends will be held at the funeral home on Tuesday, March 31, from 4 to 8 p.m.