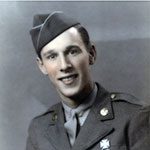 The son of Henri and Rosa (Hosquet) Jappe, he was born in Malden and lived in Wakefield most of his life. A 1941 graduate of Wakefield High School, Howard enrolled at Harvard University, took a leave to join the U.S. Army Signal Corps and served in the Philippines.

He returned to Harvard after the war and earned a degree in Physics and Applied Engineering. In 1949 he married Rita C. Leone, also of Wakefield; their marriage lasted 62 years until her death in 2011. They are survived by their sons Carl and his wife Mary, Paul and his wife Morag and Eric and his late wife Hiromi and seven grandchildren.

Howard worked in his own business as a manufacturer’s representative, selling electronic components to companies all over New England. He loved to spend time at his second home in Milton Mills, N.H. and on his nearby parcel of land, which became the Salmon Falls Headwaters Project in 2008.