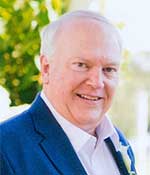 Kevin was a lifelong resident of Lynnfield and was a graduate of Lynnfield High School, Class of 1970 and St. Anselm College in 1974. He was very active in Lynnfield athletics, having served as the freshman basketball coach at Lynnfield High School for over 30 years; as well as being one of the founding members of the Lynnfield Junior Sports program. Kevin had also been a longtime basketball and soccer official. Most recently, he had been working as a supervisor at Arbella Insurance in Wakefield.

He was the beloved husband of Louanne (Croke) Canty. He was the loving father of Kevin M. Canty Jr. and his wife Julie of Wakefield, Steven T. Canty of Peabody, Daniel J. Canty of Lynnfield, and Kimberly M. Canty of Pompano Beach, Fla. He was the brother of Henry F. Canty and wife Patricia of Seymour, Conn. and the late Harold V. Canty Jr. He is also survived by his three grandchildren; Lincoln, London, and Brooklyn; as well as, many nieces and nephews.

His funeral will be held from the McDonald Funeral Home, 19 Yale Ave., Wakefield on Tuesday, May 1, at 9 a.m., followed by a funeral Mass in Our Lady of Assumption Church, Salem St., Lynnfield at 10 o’clock. Visitation for relatives and friends will be held at the funeral home on Monday, April 30, from 4-8 p.m.