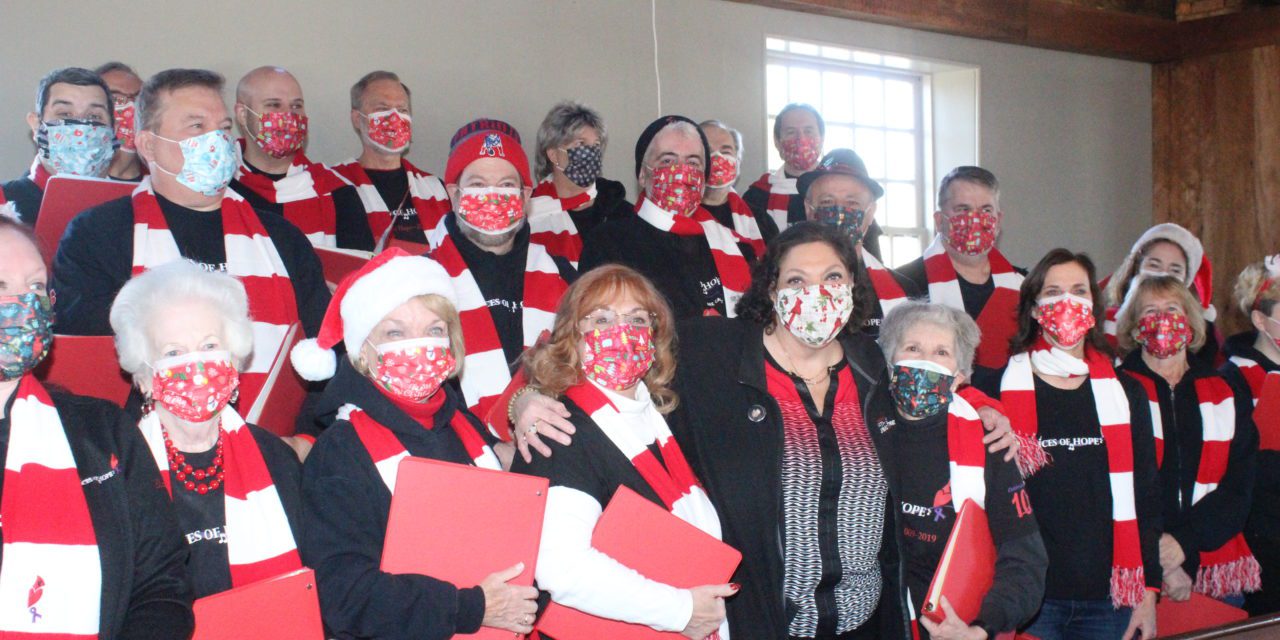 LYNNFIELD — The community came out in droves to support the triumphant return of the Country Store on Saturday, Dec. 4.

Last Saturday’s Country Store marked the first time the event was held at the Meeting House since December 2019 due to the COVID-19 pandemic. Country Store Subcommittee Chairwoman Karen Nascembeni noted that this year’s event was dedicated to her late husband, Steven Richard, and her in-laws Earl and Edie. Nascembeni survived a battle with COVID-19 in the spring of 2020 while Steven and Earl passed away from the virus in March 2020. Edie passed away in December 2017.

“Today was a day full of love, light, joy, support and gratitude,” said Nascembeni, who had co-chaired previous Country Stores with her late husband. “There is no doubt in my mind that Steven was shining down on us with love, admiration and pride in seeing the countless people from all walks of our lives who came out to support us in honoring him at the Country Store. His presence was deeply felt in the hearts of all who loved him. Thank you to all of our friends and family who got us through our first Country Store with grace and kindness. It was bittersweet, but it was beautiful.”

A number of residents showed up early and were eagerly waiting for the Meeting House to transform into the Country Store. 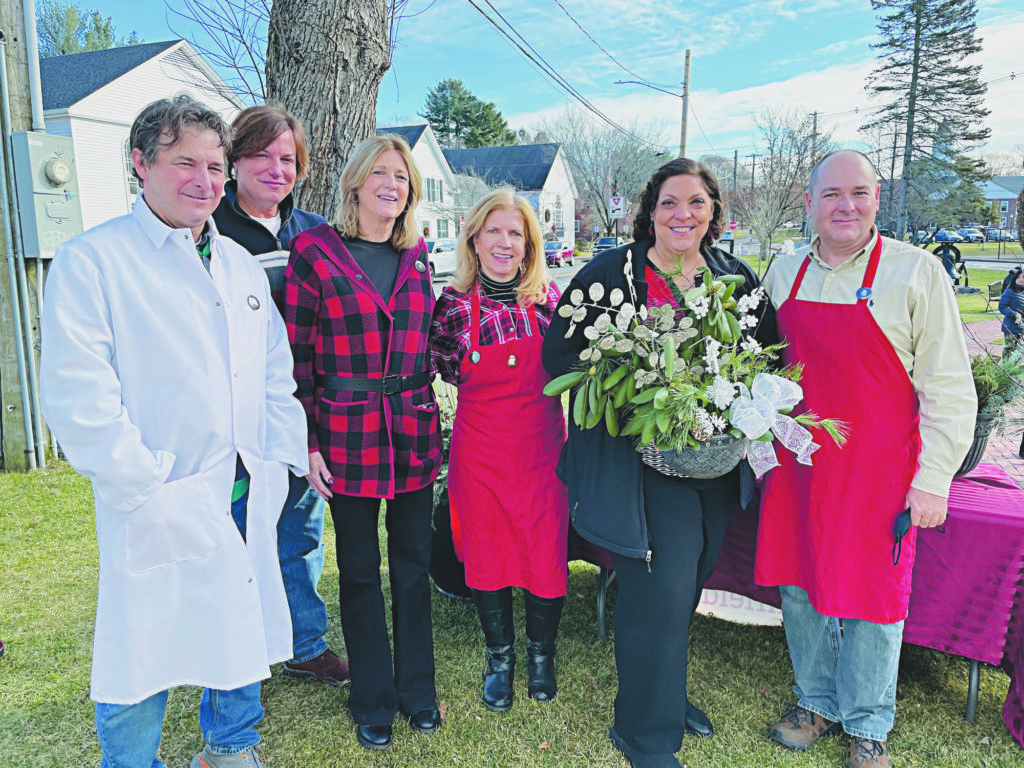 “It was absolutely outstanding,” said Mansfield.

The Voices of Hope Chorus sang holiday carols in front of a festive crowd on the Meeting House’s second floor.

“Voices of Hope is an all-volunteer organization comprised of musicians and theater artists who have a passion for music and are dedicated to raising funds for cancer research,” said Voices of Hope Executive Artistic Director Dana Siegel. “We have known Karen and Steven for years.

“We perform twice a year at the North Shore Music Theatre, where Karen works as general manager, as part of our repertoire of fundraising events. We mourned for Karen when Steven passed and we continue to embrace Karen’s healing. She wanted our music to help celebrate Steven’s life. This performance is dedicated to Karen and Steven.”

“Voices of Hope had over 30 people singing,” said Nascembeni. “We used to have the Centre Congregational Church Choir perform, but they haven’t performed at the Country Store in a few years. It was nice that we were able to bring the music back.”

Nascembeni wasn’t the only member of the Pope-Richard family to volunteer at the Country Store. Steven’s sister, Doreen DiFillippo, oversaw the ham and bean dinner table. The dinners were cooked at North Shore Music Theatre’s Backstage Bistro and used her mom’s recipe.

“I am very happy that the Country Store is back,” said DiFillippo. “My family has been involved for many years and it’s a great tradition.”

“The Country Store is very special,” said Martin, who oversaw the penny candy table. “It helps kick off the holidays and helps people get into the spirit of the season. It’s a wonderful tradition.” 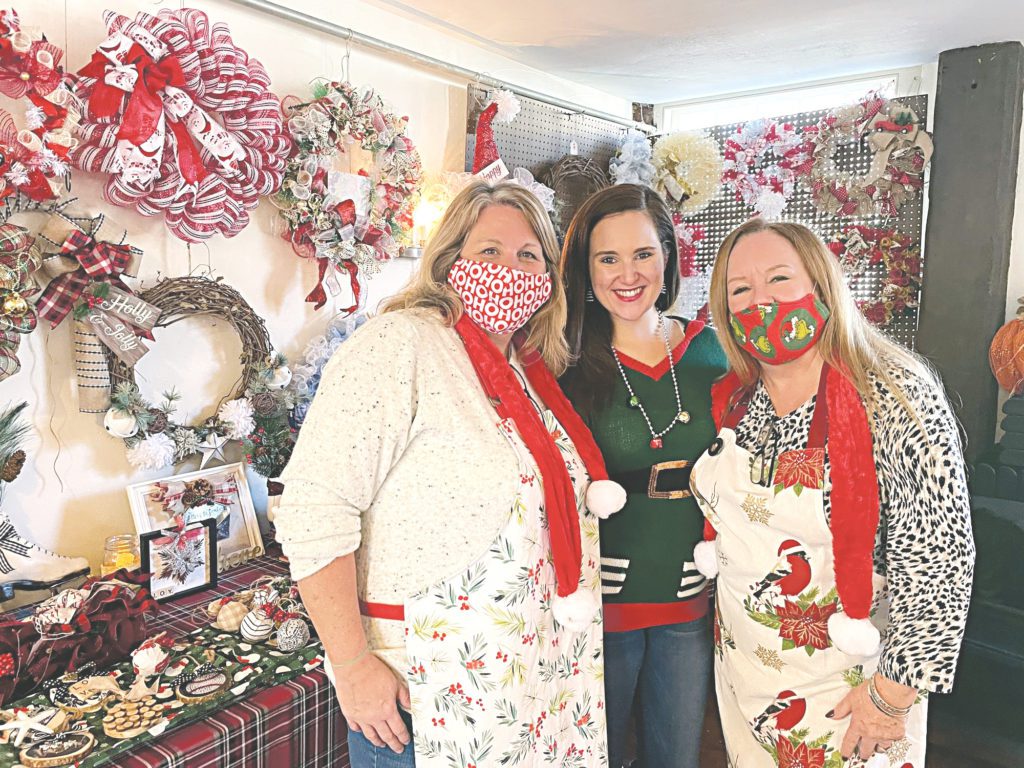 WREATH-MAKERS, from left, Linda Fair, Ariel Priestley and Lauri Priestley sold wreaths that they made during COVID at the Country Store on Dec. 8. The Priestleys and Fair started making wreaths as a hobby during COVID.

“We ran out of cheese early,” said Nascembeni.

Michalski said the event was “awesome.”

“This was my first Country Store, and it was awesome,” added Michalski. “It was a lot of fun.”

Nunziato’s wife, Karen Colby, and their daughter Logan oversaw the North Pole Fishing Hole, which gave children the opportunity to go fishing for the perfect holiday gift. Nascembeni noted that the couple helped decorate the Meeting House leading up to the Country Store.

The Village Home and Garden Club sold out of its popular evergreen arrangements.

“It was amazing,” said Country Store Subcommittee Vice Chairwoman Karen Hathaway, who is a member of the Village Home and Garden Club. “It was great that people came together in order to support Karen and honor Steven’s memory. The support from the community was just awesome.”

The Centre Club held its Lottery Contest once again and Mrs. Claus’ Snacks and Lunch Kitchen also sold a variety of food, including ham and bean dinners, hot dogs and sandwiches.

“The ham and bean suppers were very popular,” said Nascembeni.

“They did a great job,” said Hathaway. “I want to thank Don and Doreen for their support as well.”

There were several new vendors at the Country Store this year. Lauri and Ariel Priestley and their close friend Linda Fair sold wreaths that they made during COVID.

“It’s fabulous,” said Lauri about this year’s Country Store. “I am so happy that we are keeping this beautiful legacy alive and honoring Steven’s memory.”

“It was great to have Lynnfield for Love here,” said Nascembeni. “Kids could donate the ornaments to a charity or take them home. I wanted children to come and be involved.”

The Friends of the Lynnfield Library also sold Christmas and holiday books outside of the Meeting House.

“I’m thrilled that the Friends of the Lynnfield Library participated,” said Nascembeni. “They were a great new addition.”

Nascembeni was incredibly touched that the community came together and supported the Country Store’s return.

“The response has been overwhelming,” said Nascembeni. “When you put on an event during COVID, you don’t know what you are going to get for a response. The response from the community has been great. People came here after hearing the story and wanted to be here to support our family.”

Nascembeni implemented a number of safety measures in order to keep the community and vendors safe inside the Meeting House.

“We took all of the right precautions,” said Nascembeni. “We had sanitation stations and required people to wear masks. John Michalski brought in industrial air purifiers from his company. We did everything right.”

The night before the Country Store, Nascembeni and her family attended the opening night performance of “A Christmas Carol” producer/owner Bill Hanney dedicated in Steven’s memory.

Nascembeni thanked DiFillippo, Martin and the rest of her family as well as Hathaway, Mansfield, Michalski, Colby, Nunziato and all of the Country Store’s vendors for working incredibly hard to make it a successful event.

“It takes a village,” said Nascembeni. “It’s not just me. It takes a lot of people to put the Country Store together. It’s a tremendous amount of work and it’s not about the amount of money you make. It’s about the tradition. It’s quintessential Americana and is a nod to simpler times.”

Hathaway thanked former resident Denis Ritchie for filling in as Santa Claus. She also thanked her brother Tom Barry and his company, Yeuell Name Plate and Label, for making the sign that was displayed on the front of the Meeting House.

“Karen did an excellent job and we appreciate everything she has done,” said Mansfield. “I also want to thank Town Administrator Rob Dolan, Select Board Chairman Dick Dalton, and Select Board members Phil Crawford and Joe Connell for standing behind us and believing in us. They knew we could pull this off.”

Nascembeni said Steven would be incredibly proud of how the community came together in order to honor him and his family’s life and legacy.

“I think he is smiling down on us today and I think he would be so proud to see everyone come together to do this in his memory,” said Nascembeni. “My friend Josie Marino made Steven Richard buttons and we are all wearing them proudly. He blessed us with a beautiful sunny day and I have felt him all week. The Country Store was one of his favorite traditions of the entire year, and he would be proud of us for continuing the tradition. I am so grateful to the people in this town who came out to support us.”