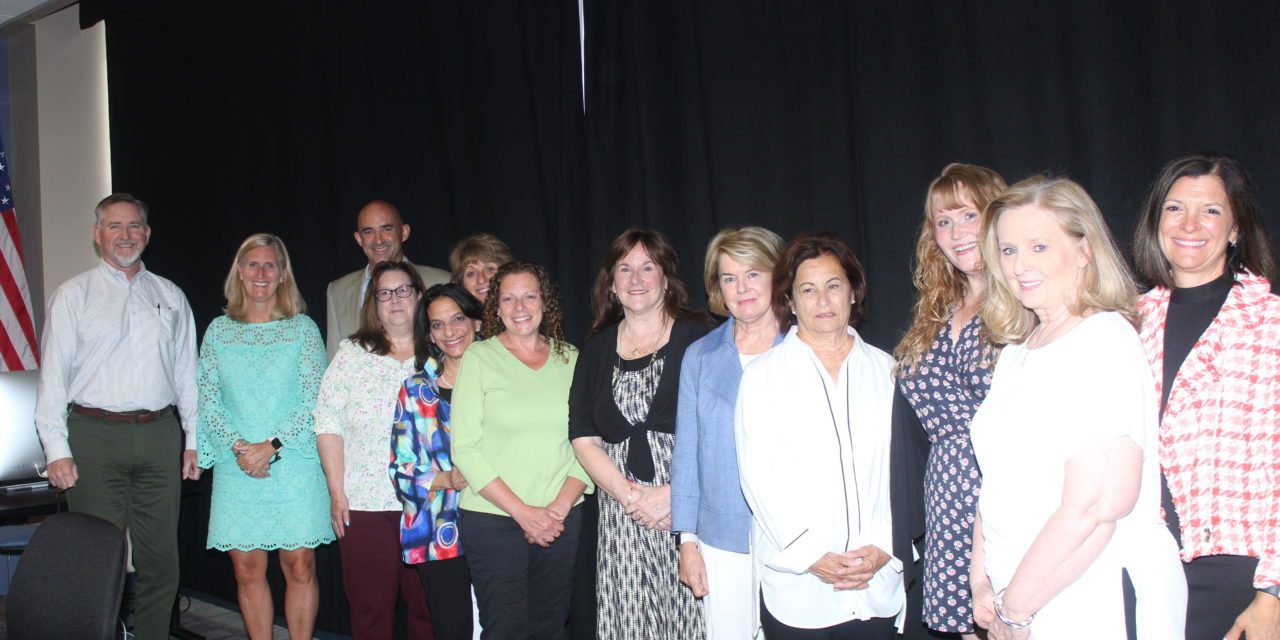 “My family has had the good fortune to build relationships with several of the retirees,” said Dahlstedt. “I can say with certainty that these teachers and staff members have made a difference in my son’s life and his educational experience. I am also certain that all of the retirees here have impacted hundreds if not thousands of students and families in Lynnfield in a very meaningful and positive way. I want to thank all of them for their countless years of service.”

Superintendent Kristen Vogel noted that nine out of the 12 retirees were able to attend the meeting. She presented the nine retirees in attendance with a pair of decorative glasses. She said the glasses contain the town of Lynnfield’s seal etched on them that were created by Essex Tech students.

“Michelle lives in Lynnfield and her kids went to Summer Street School,” said Vogel. “Michelle began teaching in the Lynnfield Public Schools in 1988.”

“In that time, Linda has met with every new staff member to welcome them to Lynnfield Public Schools when they began working,” said Vogel. “She handled any payroll or benefits questions they may have had. In addition, she has served as the district’s coordinator for substitute teachers for the past six years. This involved tracking staff absences and making calls to assign substitute teachers before 6 a.m. each school day. The demands and challenges of these roles evolved during this time, but Linda has always handled them with grace, an open mind and a strong sense of professionalism.”

Vogel said Technology Coordinator Kathleen Dario has “spent many years working on behalf of the staff and students in the Lynnfield Public Schools.”

“Over 20 years ago, Kathleen started out as a volunteer and worked her way up to become the education technology coordinator,” said Vogel. “Throughout these years, Kathleen has seen and has been responsible for many changes in technology. She has wired classrooms, tracked down phone lines, set up copiers, learned Smart Boards, had laptops delivered via school bus and so much more. Despite all of these changes, the one constant is Kathleen’s determination to do all that she can for the staff and students of Lynnfield Public Schools. Kathleen is literally only a phone call away, which many staff members can attest to, no matter the time of the day. Her dedication and loyalty to the staff of Lynnfield Public Schools will be missed.”

Vogel said Lynnfield Middle School nurse Diana Gerbick has worked for the district for the past 25 years.

“In that time, Diana has tended to thousands of students with kindness and compassion,” said Vogel. “Whether it was a small paper cut, a sprained ankle or a headache, Diana has always been there for students. Over the years, the demands upon her role have increased immensely with the administration of medication, monitoring conditions and severe allergies. She has never wavered and took on every additional responsibility with professionalism and the highest level of medical care.”

Vogel noted that Summer Street School kindergarten paraprofessional Susan Hayden, who was unable to attend the meeting, is a Lynnfield resident.

Vogel said Lynnfield High School nurse Mary Homan has worked for the school system for the past 17-and-a-half years. She recalled that Homan served as the district’s nursing coordinator as well as LHS’ nurse.

“Mary has worked tirelessly with students and the community to create wellness events to help inspire students to take care of themselves and their peers,” said Vogel. “We couldn’t have made it through COVID without her help and guidance.”

Vogel said paraprofessional Melinda Johnson has worked in a variety of special education programs at Lynnfield Middle School over the years.

“Melinda’s time was spent almost exclusively in grade 5,” said Vogel. “She supported students both in the classroom as well as in small groups and one-on-one. We thank her for her tireless efforts.”

“Lorie lives in Lynnfield and her kids went to Huckleberry Hill,” said Vogel. “Lorie began working for the Lynnfield Public Schools in 1990. She was also the Lynnfield Teachers Association president, and is ending her career as a fourth grade teacher at Summer Street School.”

“Stephanie began working for Lynnfield Public Schools in 1997,” said Vogel. “During those 24 years, she has taught kindergarten, second grade and is ending her career as the district’s ELL teacher for the elementary schools.”

Vogel said Huckleberry Hill School art teacher Kathleen Lorenzo, who was unable to attend the meeting, worked at the elementary school for 15 years.

“Kathleen worked at Huckleberry Hill from 2005 to 2020,” said Vogel. “Kathleen retired at the beginning of this school year.”

“Laura’s smile and calm manner made children and adults instantly feel at ease,” said Vogel. “She created a welcoming environment in the clinic while developing and maintaining protocols to keep everyone safe. She also retired at the beginning of this school year.”

Vogel said LHS business teacher Jim Thoen “made a smooth transition from the boardroom to the classroom.”

“Jim helped raise the financial IQ of LHS students for the last 15 years,” said Vogel. “He created the Credit for Life Fair, which was a huge benefit for our students and our community. He is an avid boater who is looking forward to spending more time on the water and with his family.”

After each retiree was given their gifts, the meeting’s attendees gave them a round of applause.