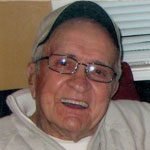 WAKEFIELD — Robert L. Woodworth, 84, of Wakefield and formerly of Allston, died Jan. 21 after a lengthy illness.

He was born in Maine on May 4, 1930 and was the son of the late Theodore R. and Ethlyn (Huden) Woodworth.

Mr. Woodworth was raised in Maine and later made his home in Allston. He had been a Wakefield resident since 1974 and was a member of the Wakefield-Lynnfield United Methodist Church. He was also a member of the Masons, was a retired union carpenter and was an avid golfer. Mr. Woodworth also served his country in the United States Air Force.

His funeral service will be held in the McDonald Funeral Home, 19 Yale Ave., Wakefield on Monday at noon.

Visitation for relatives and friends will be held at the funeral home prior to the service beginning at 10 a.m. Interment will be at Forest Glade Cemetery.