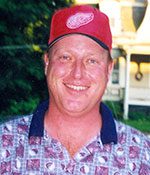 WAKEFIELD — Thomas H. Melanson, 53, of Wakefield died Saturday, Oct. 15, at the Kaplan House in Danvers after a courageous battle against cancer.

Tom was a member of Teamsters Local #25, a member of Knights of Columbus Council #104 and worked for DHL for over 25 years. Tom was devoted to his family and an avid sports fan.