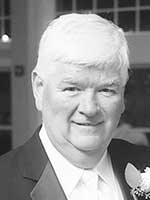 Born on July 5, 1952 to Thomas E. and Marie Mayne, Bernie was raised and educated in Malden. He was a 1970 graduate of Malden High School and received his bachelor’s degree from Northeastern University. He worked as a computer programmer and analyst for many years and retired from the U.S. Treasury Department after 12 years of service.

Bernie was an avid fan of all Boston sports. He enjoyed gardening as well as reading. First and foremost, he was a family man who enjoyed the company of family and friends.

He was the beloved husband of Lorraine M. (Policelli) Mayne and the loving father of Nicole Mayne Warner and her husband, Michael Warner, of Weymouth and Stephanie Mayne of Somerville. He was the caring brother of Peter Mayne and his wife Janet of Wakefield; Rosemary Curtis and her husband Brad of Veronia, Oregon; Thomas E. Mayne Jr. and his wife Donna Szekely of Hampstead, N.H.; and Laura Mayne of Medford. Preceded in death by his parents, Thomas E. and Marie Mayne, he was the son-in-law of Josephine M. Policelli of North Reading and the late Frank Policelli. He is also survived by several nieces and nephews.

His funeral was held from the Breslin Funeral Home, Malden on Monday October 29 followed by a funeral Mass celebrated at Immaculate Conception Church, Malden. Relatives and friends called at the funeral home on Sunday, October 28.