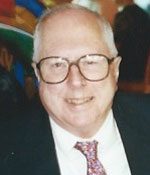 David graduated from Swampscott High School in the Class of 1952. He entered the United States Air Force and was honorably discharged four years later.

He was a graduate of Boston University and was a career-long employee of Liberty Mutual Insurance Co.

David was a member of the Boston Economics Club and Life After Liberty.

He enjoyed cheap eats and a stiff drink.

David is survived by his wife of 52 years Maryellen (Ball); his children Robert (Margaret) of Wakefield, Gregory of Newport, R.I., Kimberly (David) Hamilton of Suffern, N.Y. and Robin (Bob) Cleary of Stoneham; his sister Virginia Draper of Bedford; in-laws Bonnie and Rich Thomas, Susan and Allen Nako, Linda and Tom Younis and Kate and Bill Zamparelli. He was the grandfather of Sophie, Henry and Owen Hamilton and Erin and Megan Cleary. He is also survived by several nieces and nephews. David was predeceased by his brother Richard and his brothers-in-law Stephen Ball and Lew Draper.

To leave a condolence go to www.mackeyfuneralhome.com.