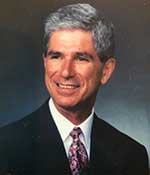 Frank was born in Lynn on June 30, 1931 and was the son of the late John and Pia (Baldini) Cataldo. He was raised in Revere and was a graduate of Revere High School and from Boston University where he was member of the ROTC. He later went on to serve in the Korean War with the United States Air Force. Frank was retired from the MITRE Corporation in Bedford where he worked many years as a Computer Analyst and was also a member of Saint Joseph Church.

Frank was the beloved husband of the late Ruth M. (Irvin) Cataldo. He was the loving father of Mary F. Taggart and her husband James of Rowley, Jane E. Sexton and her husband Dennis of Peabody and John J. Cataldo and his wife Jennifer of Calif. He is also survived by his grandchildren, Lindsey, Jennifer, Ryan, Matthew, John and Missy and his great-grandchildren, Genevieve, Madeline and Lucy.

His funeral Mass will be celebrated in Saint Joseph Church 173 Albion St. Wakefield on Thursday January 3 at 10 a.m. Relatives and friends are invited to attend. Interment will be at Holy Cross Cemetery in Malden. For guestbook visit mcdonaldfs.com.