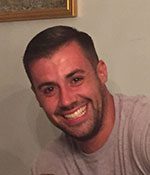 He was born in Boston on Sept. 2, 1987 and was the beloved son of Gilbert A. and Catherine (Lorio) Gallant of Lynnfield.

Jeff was a lifelong Lynnfield resident and was a graduate of Lynnfield High School, Class of 2006 and later graduated from the Marine Mechanics Institute of Orlando, Fla. in 2008.

He was an avid boater and fisherman. At present, he was the owner of J.T. Mobile Marine Service and Repair.

In addition to his parents, Jeff is survived by his brother Jackson Gallant of Lynnfield and his grandmother Doris M. (Sullivan) Gallant of Wakefield. He is also survived by his girlfriend Alyssa DiBiase as well as many aunts, uncles and cousins.

His funeral will be held from the McDonald Funeral Home, 19 Yale Ave., Wakefield on Saturday at 9 a.m. followed by a funeral Mass in St. Maria Goretti Church, 112 Chestnut St., Lynnfield at 10. Interment will follow at Forest Hill Cemetery in Lynnfield. Visitation for relatives and friends will be held at the Funeral Home on Friday from 4-8 p.m.