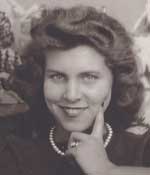 WAKEFIELD — A resident of Wakefield for most of her life, Marguerite Ann (MacLellan) Brown died peacefully, surrounded by family, after a long struggle with Alzheimer’s disease, on Aug. 23.

The second child of Robert and Florence (Berry) MacLellan was born on Dec. 27, 1929. Marguerite attended Wakefield High School, Class of 1948. During her high school years Marguerite enjoyed being a Wakefield Warriors cheerleader and made many lifelong friendships.

Marguerite is preceded in death by her parents, her husband, her son Larry Jr., her big sister Kathleen (King) and her little brother Robert.