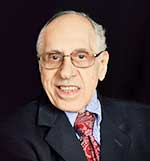 MELROSE — Roland C. Medeiros died peacefully surrounded by his family at Winchester Hospital on May 24. He passed away two days short of his 91st birthday.
Mr. Medeiros was born in Cambridge on May 26, 1926 to the late Francisco and Deolinda (Carvalho) Medeiros. He was raised in Cambridge and Somerville and graduated from Rindge Tech in Cambridge.
He graduated top of his class from Fisher Business School in Boston and later attended classes at Salem State and Northeastern University. Roland worked as an office manager and accountant for R. H. Stearns, Koplow Trimming and Windsor Button Shop for many years.
After he retired Roland continued to work for Lechmere and at Sears in Saugus until the age of 84.
Mr. Medeiros was very proud of his Catholic faith, was a longtime member of Most Blessed Sacrament Church in Wakefield and said the rosary and read his Bible daily. Roland and his wife Claire enjoyed traveling across the United States and Canada and loved taking a trip back to the Azores to visit family.
Roland enjoyed going to the theater, the Melrose Symphony and on a good day could be found working in his vegetable garden. He was a great neighbor and friend who would be the first one to lend a hand to anyone who needed a ride.
But most of all his family meant everything to him.
Roland was the beloved husband of 44 years to Claire C. (Moschella) Medeiros. He was the cherished father of Alderman Monica Medeiros of Melrose. He was the devoted brother of Deolinda Gomez of Wakefield and the late Lawrence, Francis, Edward, Edward and Fernando Medeiros. Also survived by many nieces, nephews, grand nieces and grand nephews.
Visitation was held at the Gately Funeral Home, 79 W. Foster St., Melrose on Tuesday, May 30, from 4 p.m. to 8 p.m. Funeral from the funeral home on Wednesday morning at 8:30 a.m., followed by a Mass of Christian Burial at Most Blessed Sacrament Church, 1155 Main St., Wakefield, at 9:30 a.m.
Interment at Puritan Lawn Cemetery in Peabody.