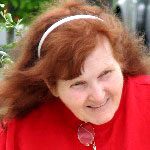 EPPING, N.H. — Sheila Patricia (Seward) McPhee, a resident of Epping, N.H. and formerly of Wakefield, passed away peacefully in her sleep on Sept. 28 after a valiant 25-year struggle with brain cancer and its aftereffects. She was 64 years old.

Sheila was born in Stoneham on March 17, 1950, a daughter of the late Clifton J. and Alice (Beekman) Seward. She grew up in Wakefield where she was educated in the Wakefield Public School system and graduated from Wakefield High School. She then married and moved to Delta Junction, Alaska, where she went through Army Survival Training becoming a certified “Sourdough Sal” where she resided with the moose, bear and bison for two years before moving to Socorro, N.M., where she enjoyed the desert and the mountains.

Upon return to Massachusetts she purchased the small house that would become her castle for the next 40 years. She also packed up and moved to Niantic, Conn. with her husband for two years while maintaining the home in Wakefield. After raising three young daughters, she attended Northeastern University for Marine Biology. Sheila worked at The New England Aquarium for a couple of years and was a store manager at the CFM convenient store in Wakefield for over 12 years. She started her own business, “Cruisin’ Critters,” where she made stuffed toys and dolls for children of all ages. Sheila was devoted to her husband and was the proudest mom of her three girls. She was a strong, loving woman and was loved by all who met her and never had a bad word to say about anyone.

She enjoyed her summer house on Newfound Lake, long walks on the beach and playing with her dogs, of which she always had one, if not more. She also enjoyed travel when she was able. Most of all, she enjoyed life, playing with her children and grandchildren and bringing joy to everyone around her with her infectious laughter and her smile through all walks of life.

Sheila was the beloved wife of 45 years to Bruce A. McPhee. She was the loving mother of Michele Renee McPhee and her fiancé Tim Freda of East Boston, Shannon Beth Thompson and her husband Kenneth of Saugus and Erin Bridget Donovan and her husband Jonathon of Blackstone. She was the cherished grandmother to Jimmy, Jared, Abigail, Tiana, Joshua, Kaylee, Cameron, Jayden and her two great-grandchildren Nilson and Ellena. She was the beloved sister of Joan Mary Dennis and Jack Seward both of Wakefield. She is also survived by many nieces and nephews.

Relatives and friends are invited to attend Sheila’s Funeral on Saturday, Oct. 4 at 9 a.m. from the Carr Funeral Home, 1159 Main St., Melrose/Wakefield line followed by her funeral Mass in the Most Blessed Sacrament Church, 1155 Main St., Wakefield at 10 a.m. Burial will be at Puritan Lawn Memorial Park in Peabody. Visiting hours will be on Friday, Oct. 3 from 4 to 8 p.m. in the funeral home.