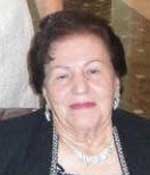 Born in Damascus, Syria on Feb. 20, 1929, she was the daughter of the late Hanna and Ellie (Sylivie) Boghos.

Mrs. Shankhour moved to the U.S. from Syria in 1978 to start a better life for her family. As a widow she courageously raised a family of 11 on her own. She enjoyed cooking for her family and entertaining guests. Her house was always open for family near and far. Times spent there were full of love, laughter and fond memories.

She was the most generous loving and kind-hearted woman and she enjoyed spending time with her family and people she loved.

She was not only smart and beautiful, Mrs. Shankhour carried herself with dignity and pride and always had a smile on her face. She was very religious and was a devoted member of St. Joseph Church. She was fortunate to be surrounded by many loving grandchildren, great-grandchildren, and great-great-grandchildren. She always felt very lucky to have so many family members to love and honor her. Her wise mannerisms influenced and touched many lives.

Mrs. Shankhour is survived by her children: Eilin Atallah, Najat Houshan, Georgette Laow and Gus Shankhour, all of San Diego, Calif.; Janet Wanis, Frank Shankhour and Tony Chankhour, all of Wakefield; Nadia Assali of Las Vegas, Nev. and George Shankhour of San Jose, Calif.; and the late Issa Chankhour and John Shankhour. She was the sister of the late Bahieh Anjim, Chaffic Boghos, Jack Boghos, Jamil Boghos and Joseph Boghos. She is also survived by 42 grandchildren, many great-grandchildren and many great-great-grandchildren.

Her funeral will be held from the McDonald Funeral Home, 19 Yale Ave., Wakefield on Thursday at 9 a.m. followed by a funeral Mass celebrated in St. Joseph Church, 173 Albion St., Wakefield at 10 a.m. Interment to follow at Forest Glade Cemetery in Wakefield.

Visitation for relatives and friends will be held at the Funeral Home on Wednesday from 4 to
8 p.m.